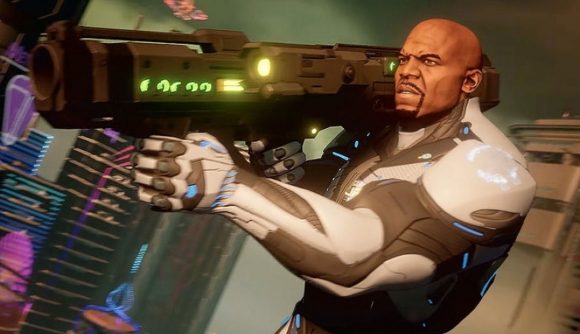 After so, so many years, Crackdown 3 is finally almost upon us. The long-awaited sequel will stumble desperately over the finish line tomorrow, but whether that’s a good thing or not remains to be seen. Before all that, though, it’s time to see what the critics thought of Terry Crews and his destructive title.

In our own Crackdown 3 PC review, Dustin says that “Crackdown 3 feels like it fell out of a time machine. Either one from 2007, when it would’ve seemed at least a little fresh, or from 2027, when some indie developers passionate for the games of their youth decided to make a back-to-basics throwback to an era of open worlds with little for you to do but run around, shoot, and pick up collectibles.”

If I’m honest, that sounds much better than I was expecting, and as you can see below, it seems to more or less match up with the rest of the critics’ scores we’ve seen so far. Sadly, at time of writing, Crackdown 3 doesn’t have a score posted on either Opencritic or MetaCritic.

Without further ado, let’s check out the Crackdown 3 review scores:

Given that the game’s been delayed three times and lost its creative director in the run-up to release, I guess we should just be glad it’s here at all. It could be worse, of course, but I wonder how pleased Microsoft is to simply have the game off its hands.

Either way, after many years of waiting, you’ll finally be able to get your hands on the destructive outing from tomorrow.