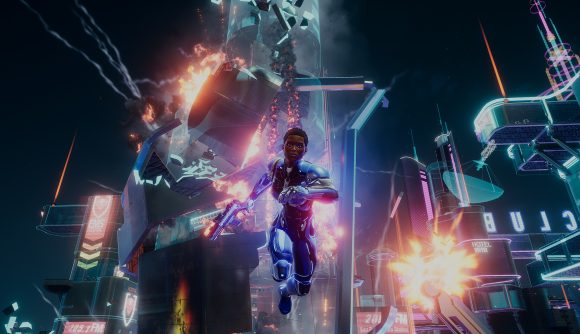 Crackdown 3 system requirements are at last here, suggesting that the February launch announced this past weekend will finally be the end of delays for this superpowered open world sandbox. Good news, too – even if your PC was built with the original 2016 release in mind, there’s still a very good chance you’ll be able to run Crackdown 3 just fine.

You can meet the minimum or recommended specs with just an i5 on the Intel side, and that translates to an FX-6300 or 8350 for AMD enthusiasts. Even on the top end, GPU requirements don’t amount to much, since you can get away with a card that’s two generations old even at the top end.

Whether at the top end or the bottom, Crackdown 3 will make use of DirectX 12. The one thing missing from these system requirements is hard drive space – we don’t know exactly how much room the game will take up.

The system requirements come alongside the other announcements at X018, hidden in a media gallery on the Xbox website.

As with all Microsoft’s current first-party titles, the Crackdown 3 release date will see the game launch across both Xbox One and PC simultaneously. It’ll be available either standalone or as part of Xbox Game Pass on day one, whichever platform you’re playing on.