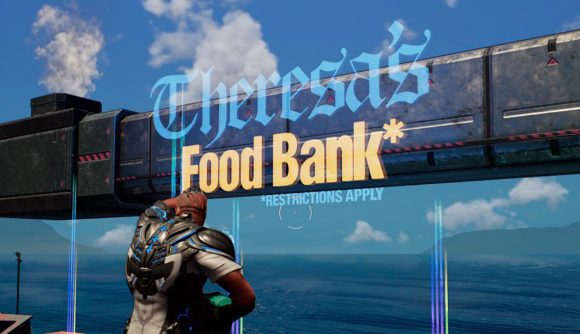 Crackdown 3 is not a smart game – or rather, it is smart enough to know that it best serves by providing bombastic dumbness. But still, it is a game a corporate regime run amok, where a city is taken over by a giant company enforcing its will through a violent, privately-owned police force. It’s just the kind of dystopia we’ve learned to poke cartoonish fun at in 2019, but the game even has a few more pressing political jokes to make.

For example, there’s a sign near the slums which references ‘Theresa’s Food Bank,’ with the added note that ‘restrictions apply.’ The detail slipped by my American eyes as I played the game for our Crackdown 3 review, but Jordon Oloman took notice of it on Twitter.

Given the degree to which food banks have been in the British news lately, and the varied amount of blame prime minister Theresa May has received for their increased prominence in the past few years, it’s tough to imagine that reference being a coincidence.

Since Crackdown 3 developer Sumo Digital based in the UK, whoever’s working on environmental art likely had at least a little bit of political commentary to provide.

It’s okay, you can go back to mindlessly blowing things up as Terry Crews now.

Big playgrounds: Check out the best open-world games on PC

If our own review isn’t enough, check out our Crackdown 3 score roundup for more. It’s not terrific, but it’s not as bad as you might’ve feared after all those years of troubled development, and I’m at least looking forward to seeing what else is hidden in the city.