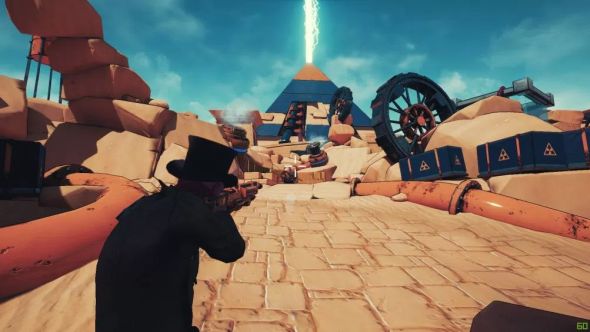 A bold indie team are having a crack at the hero shooter genre with Crazy Justice, a third-person action game with a cel shaded steampunk aesthetic and a fixation with Tesla coils.

For more quirky ideas, take a look at the best indie games on PC.

In the full version, developers Black Riddles studiopromise 16 heroes and 45 weapons, with more to come in further updates, all upgradeable and customisable. It will come to PC (and consoles) with a single-player or co-op campaign and several multiplayer modes.

During the story – which will run for eight to ten hours – you’ll travel the world in search of “the hidden Teslas”, aiming to activate them despite the chaos they will bring. The campaign promises a fun sense of humour and bio-mechanical monsters to fight.

Multiplayer modes confirmed so far include:

Early gameplayshows a man in a top hat firing some kind of energy weapon. It looks like there will be an element of terrain destruction and a bold, brass score.

Black Riddles were named best indie developers at Hungary’s CES Awards 2016. The game is still in closed beta, but you can sign up for a chance to get in on the action at their website, or follow the game’s Greenlight page here.