Intel’s RealSense 3D camera tech is finally hitting the wider world – in the shape of new cameras from Creative and Razer – but what does that mean for us PC gamers? Potentially it means the release of cheapest virtual streaming studio possible.

You’ll need a display to strap your webcam to, so check out our guide to the best gaming monitors around.

Remember how successful the Kinect was? Sorry, Kinect, it was this sort of webcam thing Microsoft built for their last couple of closed-box gaming slabs. It processed depth perception and you could use it to gesticulate and shout at your TV to control your console.

But no-one ever did. Partly because hardly anyone bothered to use it, partly because it was pretty awkward to get working if you could be bothered, but mostly because developers just couldn’t find a way to make it relevant to their games.

That hasn’t stopped depth-sensing, gesture-recognition technology being something companies keep chasing however. I blame Tom Cruise, though not necessarily just because of Minority Report. The difference between Kinect and Intel’s RealSense is the fact it’s a fully featured HD webcam as well as a depth-calculating 3D room snooper. Intel unveiled the original RealSense tech at CES a few years back, before unveiling a Creative-designed prototype which sat on top of laptops letting you wave at them. 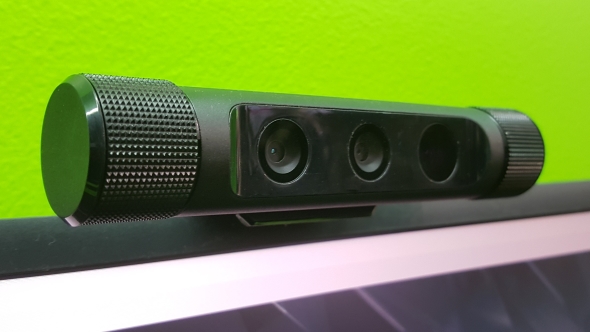 RealSense uses multiple cameras, a familiar RGB camera, an infrared camera and an infrared laser projector, to probe, calculate and map your environment with a high degree of accuracy. It allows you to capture 1080p footage at 30fps and 720p footage at 60fps and noise-cancelling microphones.

Now both Razer and Creative have unveiled consumer-ready versions of the technology in their $149.99 (£149.99) Stargazer and $199.99 (£189.99) Senz3D cameras respectively. The Razer Stargazer is out at the end of September with the Creative Senz3D likely to be a little later. But why bother when all you want your computer to do when you shout at it is apologise and maybe look a little ashamed?

For all the multi-point gesture and face recognition – allowing you to control prosthetic hands, a la Razer’s Deus Ex-inspired stand at this year’s IFA show – that’s not going to be the thing that has either Creative or Razer’s new smart webcams making sense for today’s gamers. Nor is it the ability to make a 3D map of your face to drop into NBA 2K16. The burgeoning culture of streaming is the arena which could lend these new devices some sort of gaming relevance. 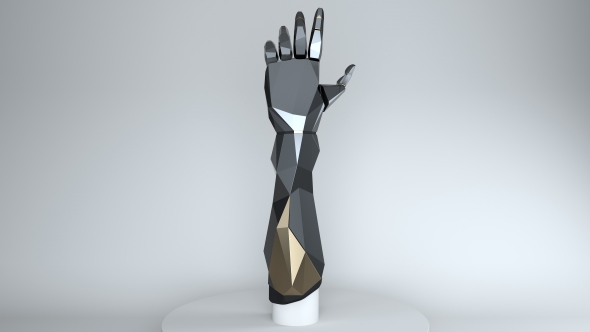 Streaming your games is easier than ever before, with a larger potential audience too, but creating a bedroom studio can be rather expensive and awkward to keep set up. With either the Stargazer or Senz3D cameras though that could be all you need. The targeted microphone is one thing, but the ability to dynamically cut out the background, thanks to the RealSense tech’s depth-perception, means no more green screens or shots of your overflowing laundry basket in the background of your livestreams.

Realistically though that is still a niche usage case for these smart webcams, with Intel pushing its partners, like Creative and Razer, into manufacturing consumer-facing products to get the tech out into the market and into the public’s consciousness. Creative have been involved with the RealSense tech right from the off, making the initial development kit camera for Intel some three years ago, with Razer only now getting involved in the consumer-facing retail phase. 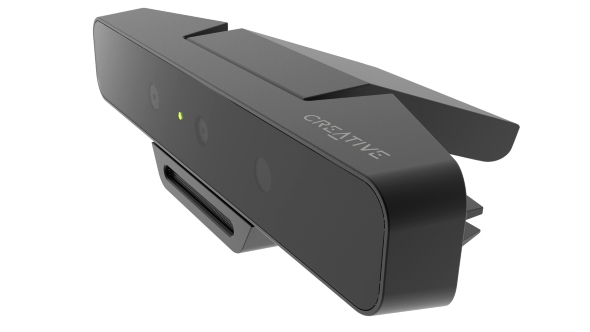 “Although it will take a little time for content to catch up with the state-of-the-art when it comes to RealSense technology,” explained Benson Low, marketing manager at Creative. “We can’t wait to see that happen . . . it’ll be truly magical.”

I’m still not 100% convinced either Creative or Razer really see the RealSense cameras as big time tech, and as Low says it’ll be a long time before the content creators start to use this sort of technology – if they ever actually do. But both companies need to create products to show their support for their bigger partners like Intel to ensure they’re involved in wherever it goes in the future.

Maybe I’m missing a trick here though, do you think such smart webcams can take off where the Kinect failed? Does it need developer support to make it relevant in-game or are the streaming benefits enough of a sell? Let us know what you think.