To paraphrase Cool James, don’t call this a soundbar, it’s an under monitor audio system. Or UMAS if you want to use an acronym that will never stick…

Need a new monitor to stick a soundbar UMAS on top of? Check out our guide to the best gaming displays of today.

The new Creative Labs Sound BlasterX Katana is a soundbar by any other name, and in the heady surrounds of the IFA show in Berlin, sounds just as sweet. That’s right, I’m misquoting LL Cool J and William Shakespeare in the space of a couple paragraphs, all in the name of PC hardware.

Built by the same engineers who created the amazing, and partially insane, X-Fi Sonic Carrier soundbar, the Katana sports a triple amplifier array, offering discrete amps for treble, mid and low-end audio. Those separate amplifiers power the Katana’s five drivers to generate a generous soundscape from just beneath your monitor.

The two mid-range drivers are pointed to the sky with the twin tweeters facing outwards. Both are supported by a subwoofer rumbling away somewhere off the desktop and altogether they create a hell of a lot of noise. But that noise is also impressively detailed on first listen too – I was played some classic light trance on a protoype unit (I would expect nothing less given the city I’m in) as well as a live vocal recording of Adele warbling away with great depth and aural accuracy. 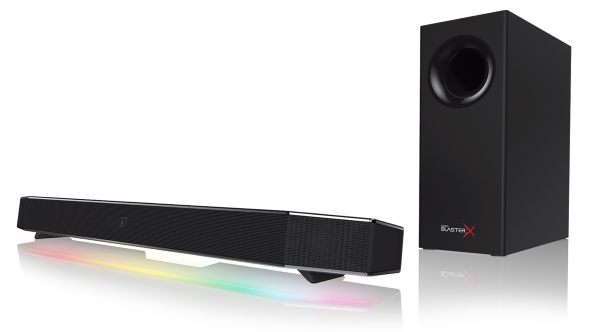 With a 150W of peak output the Katana is certainly no timid little speaker and with a DAC capable of 24-bit/96Hz lossless playback it’s capable of some very fine audio too.

There’s maybe a touch too much bass in the setup I was treated to, but the BlasterX brand is gaming-focused and that means enhanced booms for the ‘splodes. But because the Katana has a Creative USB soundcard built into it though you can play around with the audio profiles to your heart’s content. Want to knock back the bass and flatten the EQ for a more natural sound? Go for it. Want to turn it all up to 11 for a room-shaking rumble? Be Creative’s guest.

The Acoustic Engine Pro software which comes with the Katana allows you to create and store a host of your own audio profiles and even share them with other Katana-owning friends, should you have them. But it also comes with audio profiles generated for specific games and genres which you can manually switch to as and when needed to highlight and enhance different levels for different titles. 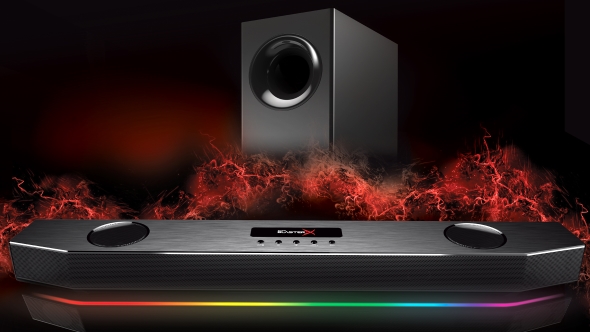 And, because it’s a gaming-focused product in the year of our lord, two-thousand and sixteen, it comes replete with customisable RGB LEDs which you can command to flash and wave and blink in whatever way you see fit. And with the new Connect software linking everything together you can have the colourful flashes and waves and blinks stretching across your new Creative RGB-lit keyboard and mouse too. Or you can just turn them all off for the sake of your sanity.

The Sound BlasterX Katana is being released in November with a Euro price of €299. We’re still waiting to hear what the Dollar and Sterling launch price is going to be for Creative’s new soundbar UMAS and will update as soon as we know more.