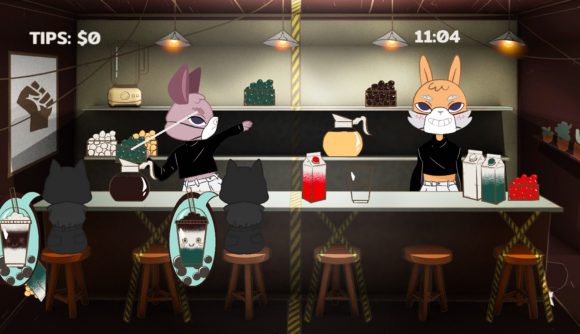 Sometimes, the developers at Criterion Games, the studio behind Burnout and an upcoming Need For Speed game, get together and have a game jam to get the creative juices flowing. For the first time, they’ve decided to let us see the results, with a small collection of quickly-made games that you can pick up for free.

The six games are a hodge-podge of ideas, from food-racer-skater Steak 4, to bunny-themed café sim QuaranTea, to the unfinished monkey stealth-’em-up Daydream. Each is high-concept in one way or another, exploring particular mechanics to hone the team’s talents, and maybe inspire a fresh direction in a game the studio is working on.

“From time to time, we get together as a studio, and spend a few days jamming together on games,” a write-up on Criterion’s site states. “We explore everything from ideas for new game features, to exploring wild ideas for games, large and small. We’ve been doing this for years, and it’s taken us to some really exciting places.” Apparently, Star Wars game Star Wars Battlefront Rogue One: X-Wing VR Mission was partly made using features from a VR game jam.

The last major work we’ve seen from Criterion was Battlefield V’s battle royale, Firestorm, in 2019. Since then things had gotten quiet, before it was revealed earlier this year that the team was back in charge of Need For Speed, after Ghost Box had been in charge for a few installments, with a new entry in the racing games series on the way.

You can find all the Criterion game jam games here – they’re free, but it’s suggested you make a donation to the British Red Cross, Doctors Without Borders, or Show Racism The Red Card if you enjoy them and have some pennies to spare.