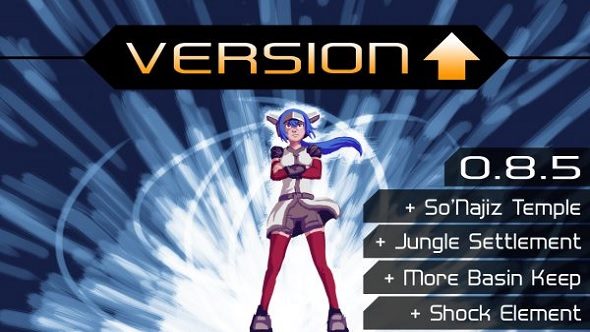 Great news for fans of 16-bit era action-RPGs, as Cross Code has just received its latest update. The 0.8.5 update adds a brand new temple for players to explore, the Shock element, as well as extensions to the Jungle area and the Basin Keep zone.

Into role-playing and all that? Check out some of the PC’s best RPGs.

Inside the Gaia’s Garden area, update 0.8.5 adds So’Najiz Temple, which contains the final element to augment your attacks. The Shock element focuses on quick attacks and boosting your movement, with it being centred around electricity.

As well as the Shock element, So’Najiz Temple also features the final key needed to open all the golden chests dotted around the world. Expect to pick up some decent loot once you clear this elemental dungeon.

In addition to these new areas for questing, update 0.8.5 expands Basin Keep, a city divided by wealth. The western part is full of well-to-do socialites, while the eastern area suffers with poverty and crime. Basin Keep still isn’t finished, so expect some chests you can’t quite access yet, as well as empty spaces where NPCs and quest givers should be.

To celebrate this update, Radical Fish Games has created a contest where Early Access players can win the chance to become an NPC in Basin Keep or Shad’s Settlement, if they film themselves beating the boss of So’Najiz Temple. Simply send a replay to this email address and you’ll be entered into a prize draw. The contest deadline is December 19 so get those entries in as soon as possible, if you want to appear in CrossCode.