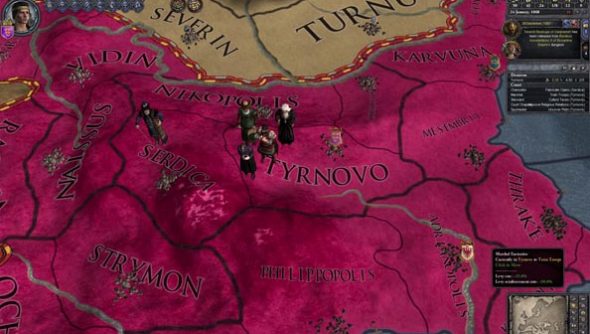 Crusader Kings 2 was received as one of the most involving medieval Europe simulators released in the past year (an accolade many strive for and often fall short of) and since its release has been enjoying a steady stream of patches. Well, so long as you went to the game’s website and updated your install yourself. Not, though, Paradox have pushed all the patches to Steam bringing the game up to date and adding a huge amount of new content.

I’ve copied the entire thing in below, lifting it all from the Steam News feed, but cast your eyes over just the major updates if none of the others:

– Added Nahua culture and Aztec religion
– Faction System
– Characters can have both a Plot and an Ambition
– Retinue System support for the Legacy of Rome DLC
– Orthodox and related religions have Autocephalous Patriarchs and the Pentarchy
– Rebalanced Combat, with more focus on leaders and their traits. More leader traits.
– Liege levies. You only raise levies from your direct vassals, and they are not directly connected to Holdings.
– A number of self improvement Ambitions for characters
– New religions: Miaphysite, Nestorian, Monothelite
– Two new Bookmarks: The Alexiad and The Latin Empire
– AI: Improved military AI
– Major speed optimizations
– Greatly reduced graphics memory load
– Plugged some memory leaks
– New events for characters with the lunatic trait
– Spymaster’s Discover Plots job has been renamed to Scheme, and now also affects faction membership
– New icons added to all decisions

Here are the rest of the patch’s changes for your perusal:

MINOR:
– Retinues no longer get free leaders
– Liege levies raised via the province view are now raised in the selected province
– You can now forbid your council from leading armies
– Optimized succession calculation, which could cause massive slowdowns in big dynasties with many landed members
– Intrigue plots vs barons or their courtiers can now include their liege’s courtiers and other vassals
– Fixed Scottish Schiltron building giving 10x defensive bonus to pikes
– Fixed Dutch cultural retinue lacking pikes
– Fixed an issue with AI strength calculations the first month after loading a game
– A bit more randomness in the size of the rebel reinforcements in civil wars
– The Pope now receives even less war contribution score in Crusades
– Fixed a crash with a null war list in Province View and Diplomacy View
– Mercenary regiments and Holy Orders will now automatically get a new leader when the old one dies
– Less likely that the captain of a merc regiment gets reassigned to lead something else
– Kingdoms no longer assimilate out of de jure empires that have no holder
– Fixed a bug with not being able to move capital back to your title’s preferred capital
– The Imperial Reconquest CB now only works for the restored Roman Empire
– The Imperial Reconquest CB no longer clears out all rulers under the title
– Disbanding multiple selected units will never disband retinues if there are non-retinues in any selected unit
– Liege levies will now disband if their owner is at war with the owner of the unit
– Retinues no longer reinforce if their owner has no money
– Diplo AI: Imprisoned vassals or below will always accept a demand for religious conversion, and go free from prison
– AI: Much better at assigning flank commanders for important armies
– AI: Less likely to go overboard with Crown Authority
– AI: Not interested in Lower CA plots in irrelevant kingdoms/empires
– AI: Fixed a bug with it not dismissing liege levies when done with them
– Army AI: Fixed a bug with invasions not happening when they should
– Ledger page with independent rulers now shows troops including retinues
– Shift or Ctrl clicking buttons in Ruler Designer coat of arms designer now multiplies the frame change by 5 or 10
– Fixed bug where byzantine unit pack was replacing all eastern europeans
– Raising troops via raise all or raise on province will now merge units
– Now allowed to ask to join tribal invasion wars
– Fixed bugged altaic culture building modifier
– Fixed the history of c_sodermanland
– Fixed consistency issue with German characters name Philipp
– Fixed faulty employment date for Robrecht van Gent
– Fixed broken Ua Conchobair dynasty
– Province of Bira no longer stays Orthodox for the entire game
– Fixed bug where imprisoned underage rulers could kill their regents
– Gave The Two Saltuks from Erzurum their correct names
– Corrections to Phillip IV of France and many related characters
– Sigrid Ylving no longer has the wrong mother
– Fixed the deathdate of King Charles IV of France
– Added missing Ecumenical Patriarchs
– Fixed a bug where courtiers of landless characters would be listed in a weird location
– Fixes and additions to various Frankish and Occitan dynasties
– Fixes and additions to the Hunfirding dynasty
– Missing marriages, mothers, children of Valdemar II and Erik V of Denmark added
– Fixed a rare crash in ‘on_siege_over’
– AI: The independence faction does not present an ultimatum until it has at least 33% of the liege’s strength
– AI: De jure vassals of your culture and religion, except kings, will not start or join independence factions
– Reduced the chance of massive rebel reinforcements for the Independence faction
– Diplo AI: Mongols and Aztecs will no longer revoke titles off human players just for having the wrong religion or culture
– Armenian, Georgian and Alan cultures updated with new names, name linkings and patronymics
– Fixes to the County of Melgueil
– Ingeborg Magnusdotter now has the correct gender
– Sartag Khan now converts to Nestorianism instead of Orthodoxy
– Corrections to the religion of several Zirid characters
– A few Catalan name fixes
– Changes and additions to the Godwin dynasty
– Fixed a bug with Primogeniture when tracing back through the current holder’s mother
– Fixed a very rare crash with Holdings with no holder
– Fixed an issue with inheritance by landless characters when there was no de jure vassal title they could take off the previous holder
– Diplo AI: Much more careful about imprisonments
– Imprisoning characters no longer affects their position in the line of succession
– Fixed a bug with the event pictures on Mac and Linux
– Added blinded trait to historically blind characters in the database
– Added missing space to Armenian dynasty prefix and Irish male patronym
– Byzantine, Armenian and Georgian character fixes and additions
– Fixed wrong liege for Duchy of Champagne and County of Gevaudan at certain dates
– Welsh/Hiberno-Norse Dublin character fixes and additions
– New dynasty for the Kurdish Shaddadids, extended Mirdasid pedigree
– On player agreement, the game now sends information to the Paradox backend when you start a game, containing the names of the DLCs and Mods you run (can be toggled with “dont_track_data = [yes/no]” in settings.txt)
– AI: The leader of a claimant faction will no longer leave the faction in an elective realm where the claimant is currently the heir
– AI: Fixed a slight bug where current heirs would not back claimant factions for themselves
– Spymaster Scheme job has been overhauled and simplified
– AI: Fixed an issue with the number of available galleys check
– Fixed an issue with part of the de jure drift mechanic not being cleared on resign

– Fixed an issue with broken portraits and other graphics on certain older graphics cards
– Fixed a bug with Claimant Faction wars becoming invalid in Elective Realms
– Fixed a bug where various Dynasty variables would not be correctly reset on resign, which could even cause crashes
– Fixed the initial tech levels in the Nestorian and Miaphysite provinces
– Fixed a crash bug in the religion view that could happen when your ruler’s religion changed
– Fixed a bug with Gavelkind succession in Empires where the holder also had many kingdoms
– Fixed an issue where you could become independent by joining an independence faction war in another realm
– Kurds now have access to the Persian cultural building
– William the Conquerer no longer set as mother of three Breton characters
– Fixed the history for c_aprutium
– Fixed deathdate of character 161537
– Fixes/additions to the Strathearn dynasty
– Fixes to the counts of Malta
– Fixed broken de Mello dynasty
– Various additions/fixes to several English dynasties
– Various additions/fixes to several German dynasties
– Renamed duplicate Onega province
– Added rulers to various Eastern pagan provinces
– Spymaster can now use Scheme in provinces belonging to your liege’s other vassals
– Fixed hunting event to correctly apply to barons
– Fixed an ugly “invalidated war” message showing messy trigger conditions
– No longer possible to start or join Factions while in revolt against your current liege
– Fixed an issue where a vassal revolt war could sometimes invalidate on mostly unrelated other revolts in the same realm
– Fixed a glitch with the tooltip on the “Start a Faction” button
– No longer allowed to start claimant factions for female claimants against Agnatic law titles
– Fixed an issue with Protected Inheritance
– Reduced size of all event pictures by 25% at no loss of quality
– Muslim Jihads no longer possible before 1187
– The title is now displayed correctly for Russian Grand Princesses
– Some changes to the religious setup in the Levant

MAJOR:
– Faction System
– Characters can have both a Plot and an Ambition
– Retinue System support for the Legacy of Rome DLC
– Orthodox and related religions have Autocephalous Patriarchs and the Pentarchy
– Rebalanced Combat, with more focus on leaders and their traits. More leader traits.
– Liege levies. You only raise levies from your direct vassals, and they are not directly connected to Holdings.
– A number of self improvement Ambitions for characters
– New religions: Miaphysite, Nestorian, Monothelite
– Two new Bookmarks: The Alexiad and The Latin Empire
– AI: Improved military AI
– Major speed optimizations
– Greatly reduced graphics memory load
– Plugged some memory leaks
– New events for characters with the lunatic trait
– Spymaster’s Discover Plots job has been renamed to Scheme, and now also affects faction membership
– New icons added to all decisions