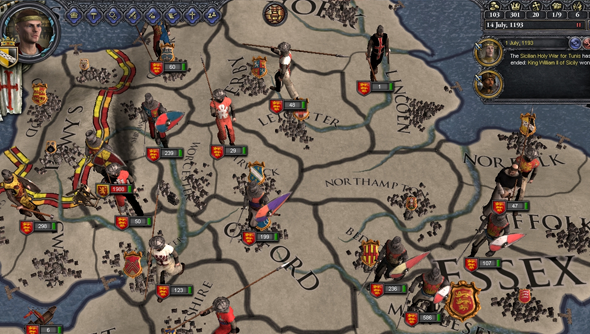 Homer foresaw Crusader Kings 2 when he wrote the Odyssey. Writing for a world that couldn’t handle it at the time, he dressed up the regency simulator as an island filled with addictive lotus flowers. Anyone who ate the flowers gave up on a life off the island, forgetting their loved ones and responsibilities.

Because Homer’s warning went unheeded one Crusder Kings 2 player has racked up more than 10,500 hours on the game.* It’s not just them, the average player has more than 99 hours of player under their belt.

Bloody, Homer, you could have saved these people.

Paradox has published a stack of numbers which show just how successful Crusader Kings 2 has become. They’ve sold more than 1.1 million copies of the game and a further 2.5 million expansion packs. Squashing both those mighty numbers, players have bought more than 5.5 million cosmetic DLCs.

It’s three years since Crusader Kings 2 launched and, on average, more than 100,000 people boot it up to play each and every month. Again, on average, there’s 2,500 people playing the game at any one time.

Have you had a taste of Crusader Kings 2’s lotus flower?

*I sure hope they game him a medal.