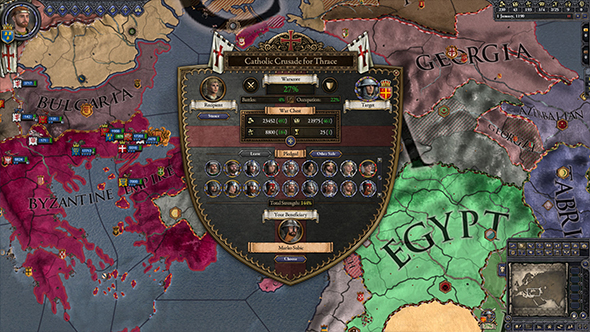 Paradox release a lot of DLC for their games, and many fans would argue that there’s too darn much of it. Getting a complete collection of add-ons for, say, Crusader Kings II would cost close to $300, and even more recent games like Stellaris and Hearts of Iron IV are already getting sizable amounts of content to buy. Paradox say “there’s room for improvement,” but it’s more about changing presentation rather than the added content on offer.

CEO Ebba Ljungerud tells PC Gamer that the company the company’s goal is to “make really great games for the customer,” but that’s not possible “if we can’t charge something for the development of the games.”

Dig into the best strategy games on PC.

In the same interview, business development VP Shams Jorjani says that for new players who “just buy vanilla,” Paradox titles are among the best value in the industry. “Green Man Gaming now puts in a value that tells you the amount of hours and money spent. There was a big discussion [on social media] about how terrible this is. But I love it!”

Yet Jorjani admits “there’s room for improvement in how we present our DLC.” He says the state of content releases for other games in the industry has “conditioned” players to have certain expectations: “if you don’t get all the content, the thing is broken, you’re missing out on something. Which is not true in our games.”

The traditional “premium business model” – a single sale of a single game – is shrinking according to Jorjani, while free-to-play and other long-term pricing structures have only become more profitable. “Our games perhaps don’t transfer over that well over to free-to-play,” Jorjani says, but the changes in the business have opened up new possibilities for how Paradox might release content in the future. They’re looking for the “convergence point that we see in hybrid models,” meaning a premium base price, but with “other ways to charge for content without upsetting everyone.”