Looking to modify your CK3 character and design a ruler fit for the throne? History is full of tales of ambitious players catfishing their way to positions of immense power, and while your character’s aesthetics in Crusader Kings 3 won’t actually hamper their fight for power, it would be nice to have a little more control over how they look.

If you have played previous Crusader Kings games then the lack of any obvious character creator might come as a shock to you given that CK2 had a pretty versatile ruler designer added as DLC. Crusader Kings 3 doesn’t have this as a launch feature, but there are some options for changing your ruler’s aesthetic that you may not be aware of. It’s also worth noting that Paradox has said that CK3 character creator is coming post-launch and will be free.

If you do want to make some small changes to your ruler’s hair and clothing then there’s the Barbershop option, which is tucked away beneath a couple of panels. And, if you’re impatient and looking to make some drastic aesthetic tweaks then we have a couple of CK3 mods to check out.

You might have missed this as it’s not presented very clearly, but you do have some CK3 ruler design options at launch in the form of the Barbershop. You can make hairstyle and clothing changes for your ruler here. 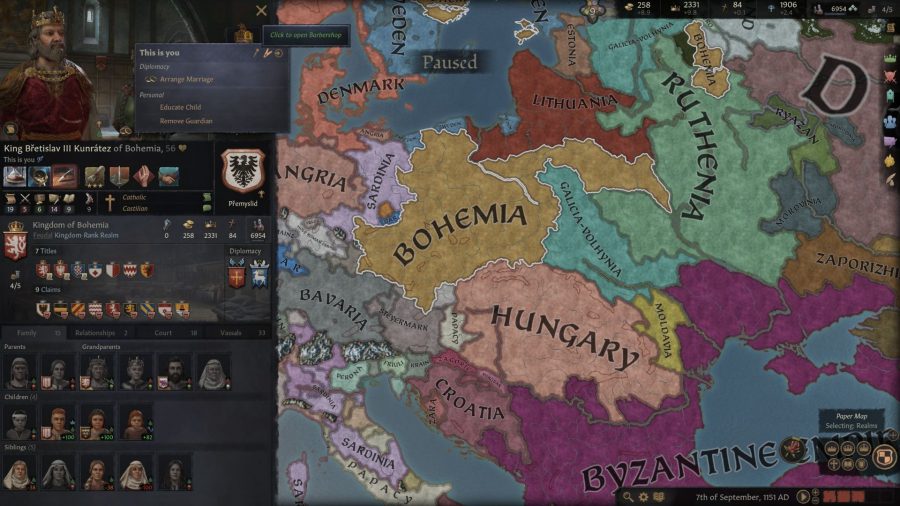 You can do this for you and your spouse, plus any children that you have.

If you’re looking to overhaul your character completely then try out some of the following ruler designer mods.

The first option is Custom Ruler Designer from SarcFa, which gives you a prompt to create a character and decide their race, gender, education traits, personality traits, physical and congenital traits, stress management traits, health traits, commander traits, sexuality, culture, and religion. You can also modify your base skill amounts. It’s not finished yet and it comes at the cost of instantly killing off your chosen dynasty in order to wipe the slate clean for your custom ruler, but it’s a smart fix if you want more control over your CK3 character.

Next up is Radical Barber from Vawser, which simply adds some brighter, less realistic hair options for your ruler via the Barbershop.

Speaking of the Barbershop, it’s worth checking out Fullscreen Barbershop, which lets you remove all UI, choose your character poses, and add a green screen for even more editing later on. Basically, if you want to make some truly ludicrous CK3 family portraits then this mod is your best bet.

Finally, we have the Barbershop For Everyone mod from Wilsonator, which lets you take your worst enemies to the barbers, change their look, and then boot them back to their respective thrones, all so you laugh at their silly new haircut.

So far, we’ve not seen many options to change the character models yet, but we’re keeping a look out and will add them when we see some good options. In the meantime, check out our beginner’s CK3 guide, plus our tips for CK3 raiding and raising levies.