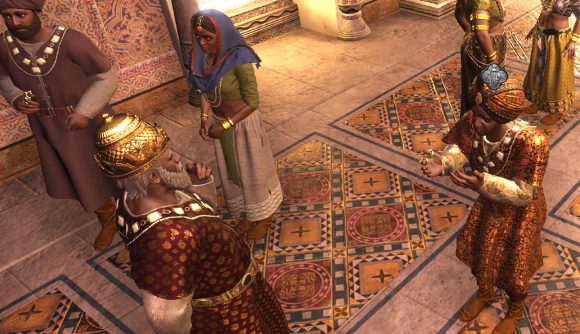 With each passing week, we learn more about Crusader Kings III and its upcoming Royal Court expansion. Recent dev diaries have finally shown us what the new 3D throne rooms will look like, and this week we’re learning more about what you can actually do in them. Are you ready for some petty drama and courtly intrigue?

The new expansion will introduce a new type of event called the ‘court’ event, which is meant to reflect the more humdrum activity of court life. “Similar to random yearlies, court events reflect the life of your court just existing,” the dev diary explains, “with all the petty drama and courtly intrigue you’d expect from a medieval monarch’s household. They primarily involve characters consistently within your court (rather than far-flung vassals or guests), and often tie into court grandeur and different levels of amenities.“

These only trigger within the court area, and are completely optional – you can ignore them, and the safe neutral options will be chosen by default when the timer runs out. Duels are also getting a rework, with new visuals, animations, and even dynamic weapons depending on what your character has possession of.

Court events will have a bit more text and flavour to them than normal events, given that they don’t need to use the pop-up real estate to also show character animations. Information and options will still be “concise” though.

Crusader Kings III: Royal Court is due out later this year, although the developers previously reported it was taking longer than expected.