Paradox Interactive’s annual showcase is now exactly one month away, where we’re expecting to get new announcements on upcoming projects, including a new Crusader Kings 3 DLC and Victoria 3’s announcement (not).

The strategy games publisher is marking the ‘road to PDXCon’ by running a ‘mega’ campaign stream, where it plans to play a single connected run through multiple grand strategy games. The mega-game will start in Crusader Kings III at the 867 start date, before going moving on to Europa Universalis IV, then on to Hearts of Iron IV before finally taking to the stars in a game of Stellaris. The event will be run across five days over the next month.

The community will be able to actively participate to help shape how the games proceed, as per the announcement post: “Acting as our ‘senate’, you can influence how each campaign unfolds. Want to see a more military-focused nation, or one that values the power of diplomacy or trade? You can shape the course of our nation through all four games.”

The Crusader Kings III leg has already begun on Paradox’s Twitch channel, and is due to run until 10pm CEST / 1pm PDT / 9pm BST:

Here are the timings for the other stages:

We’re not sure how the developers are going to handle porting the game state from one game to another at the moment. Official save converters exist to carry key information from CK3 all the way through to Hearts of Iron IV, although it’s supposed to be CK > Victoria > EU > EU4. 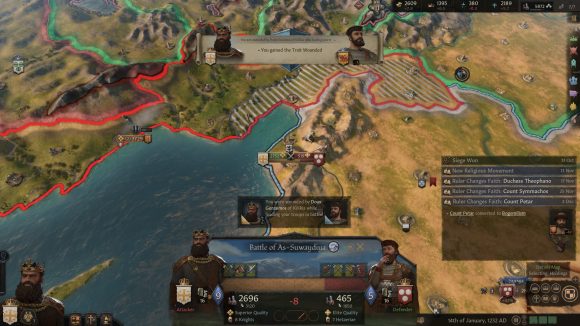 So Victoria II’s 19th Century setting will be skipped, and there’s no official converter between Hearts of Iron IV and Stellaris. We’ve reached out to Paradox for clarification on how it plans to port game data for the event.