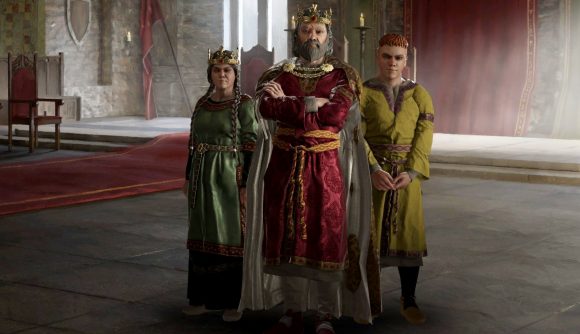 Crusader Kings 3’s next expansion, Royal Court, offers a fresh new look for the grand strategy game as it introduces a new 3D throne room, and it sounds like the new environment won’t just be a one-off. In an interview with game director Alexander Oltner, he tells us that the expansion’s new visualisations open up exciting possibilities for the series, teasing, “I would not be surprised if we want to do more of this”.

Royal Court is the first expansion for the game following the smaller Northern Lords pack earlier this year and throws players into the medieval power fantasy like never before. The addition of the 3D visual space, the throne room, allows characters to display any treasures or artefacts they accumulate while playing, as well as giving them the option to hold court.

This feature marks a stark difference from the predominantly text-based gameplay of the Crusader Kings series that strategy lovers have come to expect. Instead of interactive text boxes, the 3D element now lets players witness events first hand and immerse themselves as King or Emperor.

Oltner says that the new three-dimensional aspect helps sell the fantasy to players and speaks enthusiastically about future possibilities.

This visual move is a major aesthetic shift for the game that is likely to influence future expansions as well as marking a significant evolution for the series overall. So far, Oltner has given some clues saying that characters will be tied together more, stating, “we want to tie them to physical places and connect them with the map. We’re going to look into doing more of this in the future.”

It will be exciting to see what future content will follow Royal Court, which currently has no official release date.