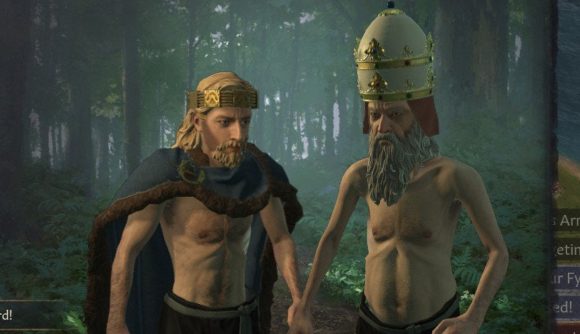 We don’t know why it happened – surely there were decades’ worth of bad blood between the two men – but a Crusader Kings III player recently fought the pope in single combat and emerged victorious. We’ve seen some strange things in the latest version of Paradox’s medieval grand strategy game, but we have to admit this is the first time we’ve witnessed the pontiff personally get into an axe fight.

“I just fought the Pope in single combat,” writes redditor -Slackz- in the Crusader Kings subreddit. As proof, -Slackz- supplied a screenshot. Sure enough, an event window has popped up showing his ruler, a young and scrawny Norse leader named Fylkir Hakon, squaring off against the wiry-framed Pope Stephanus. Both men scowl at each other in a wooded scene, bared to the waist because if you’re going to fight a guy, you take off your shirt.

While it seems pretty clear -Slackz- is running a mod or two, complex duels are now a permanent fixture in Crusader Kings III, thanks to a new system added in the 1.3 ‘Corvus’ update that makes battles of honour much more interesting.

While we knew about that new system, we clearly weren’t prepared for just how interesting things were going to get. An axe battle with the pope himself? Forget it, Jake – it’s Crusader Kings.

Anyway, it seems Hakon wound up winning the day – Stephanus apparently yielded just as the Norse leader was lining up to “split his groin in two,” according to the flavour text. The bruised and battered Stephanus headed back to Rome, while Fylkir gained a trial-by-combat hook on the quarrelsome Holy Father.