Raiding is a Crusader Kings 3 mechanic that returns from CK2 and allows Pagan or Tribal ruler types to raid the lands of other rulers. This works a little differently to standard warfare in CK3, but you’ll still need to jump through a few hoops before going Viking on your neighbours. Crusader Kings 3 raiding is a lot more difficult than in CK2 with longer waiting times for raids and more costs associated with raiding, too.

In addition to these costlier, more time-consuming raids, you will also find that standing armies are a lot stronger than in CK2, so your best bet as a small raiding nation is to only attack the smallest states you can find. You can check this by looking at enemy territories and hovering over their banner to see how many troops they have at the ready. You can also check how much loot you’ll get in by hovering over an enemy banner, so picking the maximum loot from the smallest army is the way to go.

The first thing you need to do to raid in CK3 is raise a raid army. To do this you’ll need to head over to your military tab and either select a rally point near an area you want to raid, or create one. Once you’ve done this, click the rally point, which should open up a new tab at the bottom right of your screen – the key here is to choose ‘raise local raiders’. Only the Norse can perform sea raids, so for any other rulers you will need to make sure the journey can be made on foot. You can also raise all your available soldiers as raiders by clicking the ‘Raise All as raiders’ button at the top of the Military tab.

This newly raised band of raiders will look like a standard army, but if you study their banner more closely you’ll note three torches that signify they’re raiders. To start the raid simply grab the raiding army and order them into any neighbouring neutral province, which will start the raiding process. The raid itself will take several days, and if you’re raiding by sea then be prepared for a gruelling waiting time as they disembark. You can check the progress and loot earned from a raid while it’s active by checking on the tab of the raiding army itself (just click on their banner to pull this up). 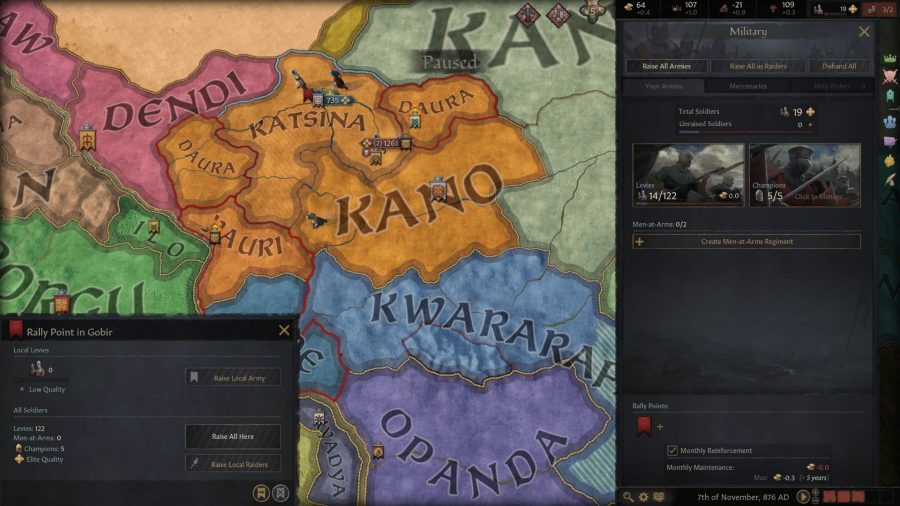 When the raid is over you’ll then need to grab the army and have them return to any province that is under your control, which will move all of the loot, renown, and any other goodies to your stash. It’s then up to you whether you want to try another raid on a different province or if you want to disband the party.

If you’re still struggling with raiding and finding the pace just isn’t viable then it may be that you can improve your efficiency by getting key perks and traits like Martial. If the costs of sea raids are getting too pricey, then tech long longships will cut the costs of disembarking severely.

If you’re still digesting CK3, then take a look at our glowing Crusader Kings 3 review for our thoughts on the game. Otherwise, we also have a suite of the best strategy games and 4x games to satisfy further war-waging and back-stabbing. Finally, it looks like the CK3 mods scene is already in full swing, so once you’ve got the hang of raiding maybe try expanding your game in a different way. You can also check out our guide to CK3 console commands, or learn a little more about succession laws to make preserving that raid loot for your heirs a little easier.