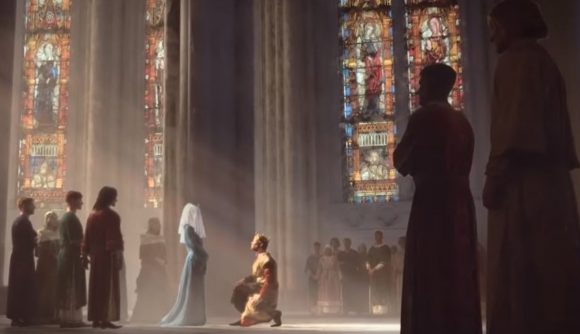 Getting a strategy game right is always a fine balance, and sometimes choices have to be made to make the experience enjoyable first and foremost. Developer Paradox Development Studio has made a tweak to the seduction mechanics in Crusader Kings 3 to make sure players aren’t dealing with too many advances.

The change is discussed in the latest development update. “Sometimes we have had to have some restrictions on the AI, for how it interacts with the player. Just so that it doesn’t get overwhelming or frustrating,” says programmer Magne Skjaeran. “A prime example here is seduction, where at various stages of the game we’ve needed to tweak the rules there, so that if the player is playing a woman rather than a man they don’t just get a hundred seduction attempts constantly. Because while that might be sadly quite realistic in some ways, it’s not an experience you want in the game. Or in reality.”

Romance plays no small part in Crusader Kings 3, and some effort has gone into making sure you can find love in whatever way that suits you. There’s the lifestyle perks that let you seduce anyone, and the procedural sex scene generator, to name but two specific inclusions. Some concessions must always be made for balance and not stressing players out too much, and this change sounds like just that. Nobody likes an overflowing inbox, and if it’s favouring one gender over the other, that can be especially infuriating.

We previewed Crusader Kings 3 back in May, and out Richard Scott-Jones enjoyed his time, with some caveats. He had a chat with Joe Robinson, editor of sister sites Wargamer and Strategy Gamer, all about it, too.

You can watch the full update below:

The Crusader Kings 3 release date is set for September 1.