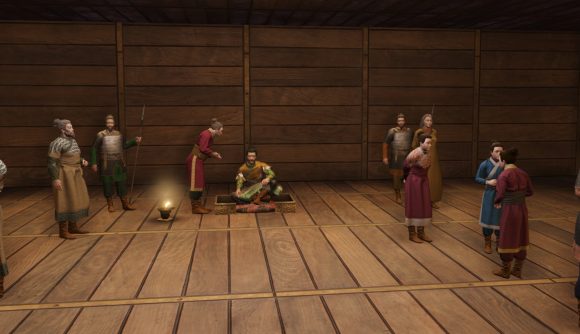 While Crusader Kings III’s world map doesn’t (yet) include East Asia, you can still go visit for a few hundred years. The Shogunate is a total conversion mod for the medieval grand strategy game that focuses on Japan’s Sengokou period, the feudal era that lasted from 1467-1615.

Based on the Nova Monumenta Iaponiae Historica mod for Crusader Kings II, Shogunate operates according to many different rules from the feudal period of the base game. It’s based on historical records and includes many of the Sengoku-era daimyo, as well as their families, and you can play as any landed character in the game. There are a dizzying number of potential starts, but if none of them appeal to you, you can create your own Sengoku-era daimyo and set out on your own path toward claiming the shogunate.

Once you make the decision to found a new shogunate, all of Japan becomes your de jure territory, giving you a casus belli against anyone. However, other characters are going to be less likely to heed your call to war – they’ll need at least 50 positive opinion of you to join in a defensive war, and a +75 opinion of you if you want them to join you in any offensive action.

Shogunate also adds special buildings like mines, trade ports, and gunsmiths that will add bonuses to income and military power for their top liege. Historical events will unfold to unlock cannon and arquebus innovations, and you can earn ranks and climb to the top of the imperial court.

The mod is compatible with the new Royal Court DLC, and there’s even a unique throne room style for Sengoku daimyo, and plenty of additional period artwork included as well.

You can find Shogunate on the Steam Workshop. Installing is as simple as clicking subscribe – the next time you launch a new game of Crusader Kings III, it’ll be a Shogunate campaign.