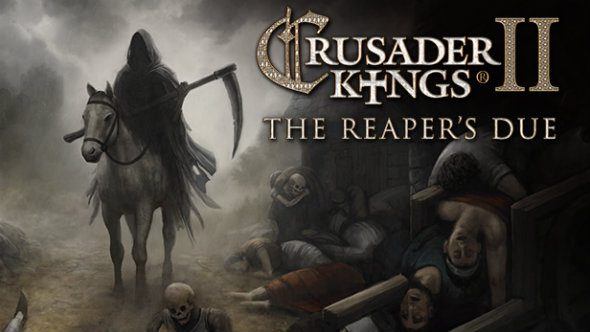 Update August 24, 2016: A developer diary has been released for the latest Crusader Kings 2 expansion, which inflicts famine and disease onto your kingdom.

The Reaper’s due expansion will lower your life expectancy, sweeping epidemics like the Black Death across the world with upped ferocity. It could force you to retreat into your holdings with your family and wait it out as the common folk die in the cold streets.

Of course, the local population will soon begin to blame you, thanks to your cowardice. Luckily, you can blame it on a cat. Yes.

Check it all out in the video below:

Original Story August 2, 2016: If Crusader Kings 2 wasn’t bleak enough for you, there’s an expansion coming out towards the end of the month that will riddle your holdings with pestilence, famine, and death. Fear the Reaper.

The expansion will feature new disease and medicine mechanics, returning “the Black Death to its rightful place in the centre of medieval history” while adding new systems that reward forward-thinkers.

The Reaper’s Due will land along with a significant content patch, available for all players, expansion or no.

Among the changes, there will be new custom rules options for epidemics, invasions, legal changes and more. There will also be the option to tweak auto-save to perform at different intervals.

On top of this, there’s a new interface for better understanding the death and succession of rulers, adjustments to how alliances work, including AI attitudes to disloyal allies, major optimisation improvements, a new “Continue” button on the game launcher, new mod triggers to account for The Reaper’s Due content and a bunch of balance tweaks.