Ubisoft have announced that their Montreal studio are working on a fourth Far Cry game, and that it will release later this year. As previously rumoured, Far Cry 4 will be set in a region of the Himalayas mountain range.

There will also be elephants, which should make Far Cry 3’s bears seem laughable in comparison. Elephants are rad.

Along with an “exotic open-world” and the series staples of guns, vehicles, and animals, Far Cry 4 also brings with it a new unchained villain, who (assuming the man taking centre in the artwork is our villain) looks to me a man of great taste in the tailoring department. Sat on a throne of carved rock on the game’s box cover, “The King” is sporting a sharp pink two-piece suit. 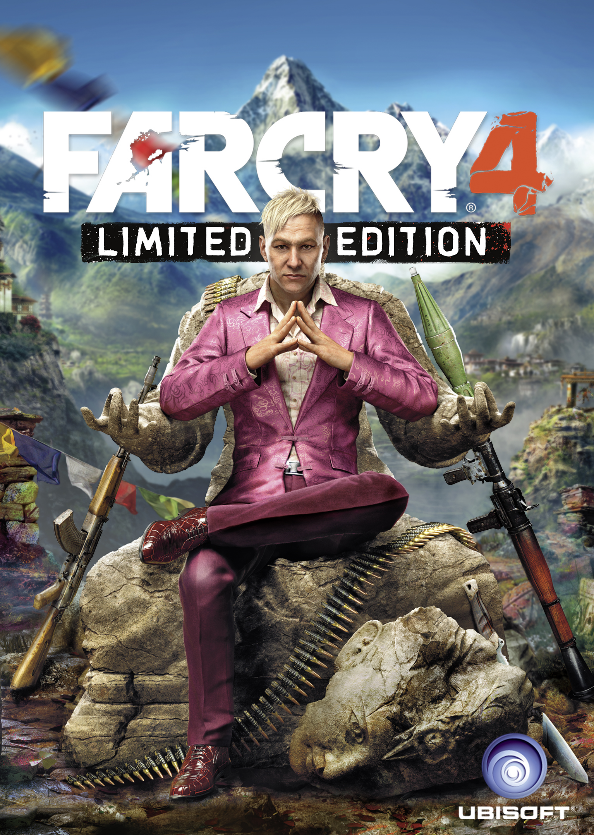 “In Far Cry 4, players find themselves in Kyrat, a breathtaking, perilous and wild region of the Himalayas struggling under the regime of a despotic self-appointed king,” said Ubisoft. “Using a vast array of weapons, vehicles, and animals, players will write their own story across an exotic open-world landscape.”

“Following the success of Far Cry 3, we wanted to take the franchise to the next level and create a game that will surprise players and exceed fans’ expectations,” said Dan Hay, Executive Producer. “Given the unique setting, we feel Far Cry 4 will stand out as a top first-person shooter and we’re eager to reveal more about the game in the coming months.”

The game is being developed by Ubisoft Montreal, along with Red Storm Entertainment, Ubisoft Toronto, Ubisoft Shanghai, and Ubisoft Kiev, making Far Cry 4 quite the collaborative effort.

In console land the game is being developed cross-platform, on both last gen’s PS3 and Xbox 360 and current gen Xbox One and PlayStation 4. Using something known in expert fields as ‘guesswork’, I hypothesise that the game will look graphically similar to Far Cry 3 (and probably run on the same engine), due to the limitations of the aging consoles. Not that that’s too much of a problem, since Far Cry 3 looked bloody gorgeous.

Of course with every announcement comes fingers pointed at pre-order retailers, and if you were so inclined to order right this second, you can secure a Limited Edition variant of the game that comes complete with three missions as a pre-order bonus, starring Hurk of Far Cry 3’s DLC. You’ll also nab a harpoon gun too.

But when does Far Cry 4 come out, I hear you… cry. Well, you can prance around Kryat and shoot even more exotic endangered species than ever before on November 21st.

You can head over to the Far Cry 4 website to read all of this information again in a prettier font. To see the game in action, you’ll have to wait until Ubisoft’s E3 presentation.