You know what they should call this M.2 cooler? An M.3 cooler. Get it? Because it’s big. No, please don’t close the ta-

What I was trying to say was the wonderfully eccentric Cryorig Frostbit M.2 NVMe heatsink is now up for sale. After being announced way back at Computex 2018, this chunky heatsink SSD chiller is now available in Japan through suppliers Links International Co. Ltd (via PC Watch), and, pending a restock, in Australia, too. PC Case Gear has the Frostbit available for $39 AUS with an ETA of September 20, 2019.

Why a limited release so far? Perhaps that has something to do with Cryorig’s recent suspected dance with death. Speculation of Cryorig’s imminent shutdown was recently rife across Reddit, however, a spokesperson for the company, speaking with TechPowerUp, confirmed that these rumours were untrue, but not entirely unfounded. The company said the US-China trade war was to blame for the slowdown in its US-based business, but not to worry because it’s now sought out a US-based distributor, Outlet PC, to handle all of its business needs in the USA. Stock will reportedly return to the shelves this month, maybe with the Frostbit in tow.

The Frostbit is rated to a 12W TDP and is suitable for most M.2 drives up to 72mm in length. It features two heatpipes, one ultrathin copper tube directly above the M.2, and another much larger one, you guessed it, between the M.2 cover and the sizeable heatsink floating above. This also acts as a hinge for the gratuitous hovering design, with the adjustable arm able to shift the heatsink out of the way of your other major components, such as a graphics card or CPU cooler. 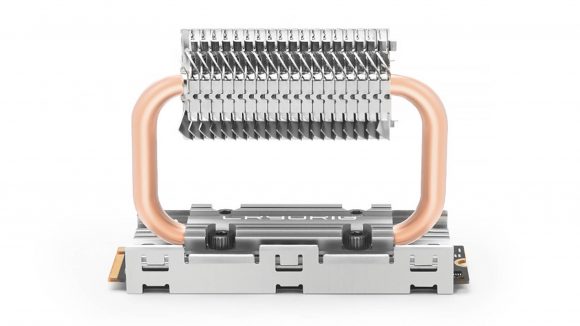 But do you really need an SSD cooler? Probably not. There are a few cases where one may be of use, such as transferring massive files between drives on a semi-regular basis or if your NVMe is in a particularly poor position on your motherboard without direct airflow from your case fans, but for the most part prolonged SSD-intensive workloads are not all that common on a strictly gaming-only rig. While your SSD may peak in temperature during loading screens, that’s nought to worry about.

NVMe drives are becoming commonplace, however, and are now suspected to equal SATA’s market share by the end of 2019. So perhaps there’s a case to be made for an SSD cooler once we’re cramming more and more of them into our rigs in less-than-ideal locations. And also what hardware buff worth their salt can turn down a chance to have this glorious chunk of metal in their rig whether it’s worth it or not?