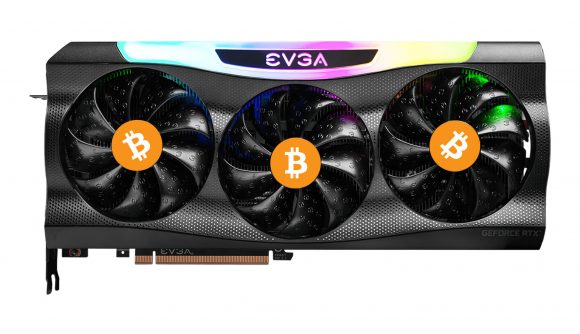 It might seem like common knowledge that the finest graphics cards can help boost fps, increase your resolution, and bump up the settings of your favourite games, but the promise of cryptocurrency-shaped riches has the winner of an RTX 3080 raffle oblivious to his GPU’s original purpose.

After praising the RNG gods that he beat the current stock issues and now has his hands on one of the most coveted components in the world, prizewinner Barry Tender’s celebrations are cut short when we ask what’s the first game he’s going to play. “It plays games, too? I thought I just needed to plug it in to get rich,” Barry exclaims.

When we question if he’ll end up on Steam now that he knows what his system will be capable of with ray tracing, DLSS, and Resizable BAR support, Barry tells us that our suggestion “sounds painful” and that he’s just going to stick with mining for now. His hope is to eventually save up enough cryptocurrency to buy an RTX 3090, which will then be used to grab a 40 series card when it comes out.

We explain that Nvidia’s dedicated CMP (Cryptocurrency Mining Processor) range functions largely the same as the GeForce RTX gaming series without putting strain on supply for gamers, but Barry isn’t deterred from his current plan, saying “it won’t matter when I’m rolling in it.”

Update: We wanted to clarify that this story is an April Fools’ Day joke. GPU, RAM, and SSDs being smuggled on speedboats, however, surprisingly isn’t.