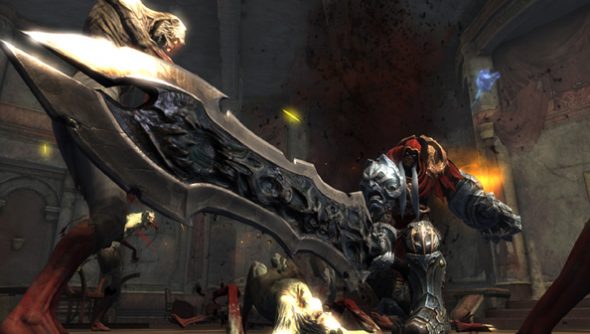 Crytek USA was founded earlier this year by a 35-strong core team from Vigil Games, which had been shut down alongside parent publisher THQ barely two weeks before.

“Going to bid on Darksiders IP,” said former Vigil founder and Crytek USA head David Adams on Twitter. “Put 7 years of heart and soul into that franchise, and I think it belongs at home with its creators.”

By way of confirmation, Vigil co-founder and Crytek USA principal designer Ryan Stefanelli told Destructoid: “When the Darksiders IP goes up for auction, Crytek will be bidding for it.”

Bidding began on Monday, and will run til April 15. But Crytek might not be the only serious contenders hoping to bag the four emo horsemen. Bayonetta lot Platinum Games alsopublically played with the idea of buying the license – so long as they could get it “on the cheap”. Charming.

Vigil had been working on a Darksiders 3 for some time before the studio’s closure, alongside a project codenamed ‘Crawler’. However, Crytek head Cevat Yerli said in February that Crytek USA would be working with the company’s internal tech.

“The team is super-excited to be working with CryEngine 3,” Yerli told me. “I said to them, ‘What do you guys really want?’, and there was not even one single hand that was not up there.”

Are you hoping for more Darksiders? Or would you prefer to be blindsided by something new?