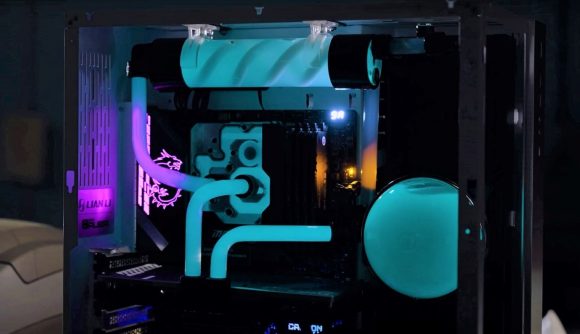 When it comes to decorating your high-spec gaming PC, there’s an abundance of options out there. From simple RGB case fans and CPU coolers to elaborate UV-powered liquid, being a bit extra about your next build has never been easier. Yet, against all odds, a bizarre lighting alternative has emerged that makes even the most ambitious builds look conventional, and involves natural bioluminescent chemistry.

Assembled by Linus Tech Tips, with a little help from Nyoka Design Labs, the rig is dubbed the world’s first bioluminescent gaming PC. While the coolant within this striking setup looks like glow stick fluid, it’s actually a concoction of concentrated E. Coli. However, it’s worth noting that the bacteria in question isn’t pathogenic and has been engineered specifically with safety in mind.

Linus’ video delves into the science behind giving the PCs juice its natural glow, but the process essentially involves feeding the E. Coli two compounds; luciferin and luciferase. Allowing the microbes to munch down on the enzymes creates a chemical reaction that causes them to glow. The result? Well, if this PC were an anglerfish, we’d be dinner by now.

Before you start making plans for your next build, cooling your PC with enzymes isn’t just impractical; the fluid’s microparticles could also damage your CPU block. So, while bioluminescent PC lighting is mesmerising, it’s unlikely to replace your usual coolant, like EK-CryoFuel. As demonstrated in the video, the process of actually filling the cooling loop with the bio-mixture is laborious, and rushing things could damage expensive components like your GPU. 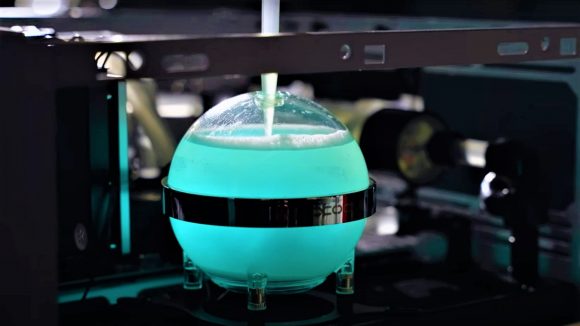 Naturally, Nyoka Design Labs’ has an environmental pitch for its biotechnology, as it can be used to replace traditional glow sticks that contain air-polluting chemicals. Nevertheless, while we’re not likely to see Nyoka’s impressive glowy gunk filling custom or AIO coolers any time soon, perhaps we’ll see setups that can sustainably use the solution at some point in the future.