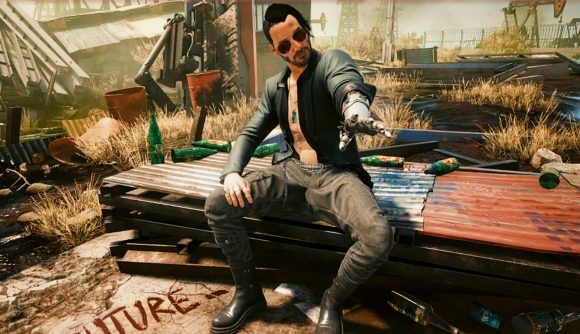 Cyberpunk 2077 patch 1.3 is on the way, and developer CD Projekt Red has published the patch notes ahead of its release. The list details a host of changes coming to the open-world game, which has been troubled since its launch late last year with a host of bugs and missing features. Today, however, the studio took a cautiously hopeful tone in a livestream, explaining what’s coming to Cyberpunk 2077.

Patch 1.3 will include three new pieces of free DLC: there’s an alternate look for Johnny Silverhand that features a more ’emo’ look and undercut hairstyle, two new rare/iconic jackets for V that you can access once you’ve finished The Ride quest, and a new Nomad vehicle called the Archer Quartz ‘Bandit.’ Once the patch arrives, you’ll be able to enable this content in a new ‘Additional Content’ heading in the main menu.

As was hinted in yesterday’s ‘Development Insight’ post, the GPS system is getting some needed tweaks. With patch 1.3, the minimap will zoom out and shift forward slightly when you’re in a vehicle, allowing the map to show turns coming in a more timely fashion. CD Projekt says this was a surprisingly difficult problem to address due to the demands Cyberpunk 2077 already has in terms of texture streaming.

Additionally, you’ll find a new respec button in the skill tree menu screen, which allows you to reallocate all your perk points in exchange for a fee in eddies – this is meant to encourage more experimentation with character builds.

The patch notes detail additional quality of life improvements, such as an increase in autosave slots from 10 to 20, and for quicksave slots, which will be increased from three to 10. Quest information in the journal will have accompanying entries in the codex linked alongside it, which will help provide some more context for whatever activities you’re engaged in.

The team has also added a new option to add a static dot overlay to the centre of the screen to help players who struggle with motion sickness while playing first-person games. Oh, and Nibbles the cat now has multiple places to sleep in V’s apartment, including a laundry basket – highly realistic cat behaviour, that.

The patch notes also include multiple improvements for performance, stability, and memory optimisation, which should result in better framerates and few hitches and spikes “especially during combat.”

Here's a list of the most notable changes coming in this update: https://t.co/P4BZ9pohBS pic.twitter.com/awBD6KWdAn

There’s a lot in the notes, and they’re worth reviewing in full. During today’s livestream, the team’s tone was strikingly different: for the first time since launch, the developers appeared optimistic and hopeful about Cyberpunk 2077, although they’ve also clearly been chastened by the past eight months.

But Mills and his colleagues say they’re determined to get Cyberpunk 2077 back on its feet, and explained that with patch 1.3, the RPG is finally in a state where they feel comfortable moving forward with plans for more extensive DLCs and expansions.

There’s no set release date for the patch yet, but CD Projekt Red says it will be available “very soon.”