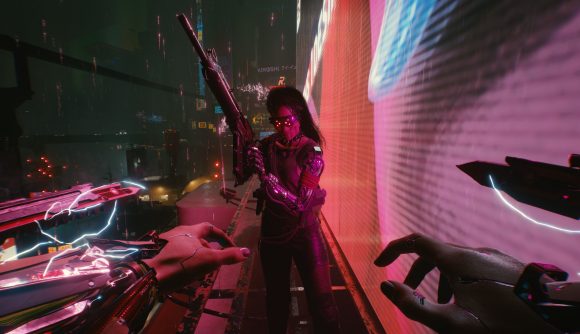 Cyberpunk 2077 launched over a year ago, and while developer CD Projekt Red provided a big pile of free patches and improvements over the course of 2021, there are still some key updates set for a mysterious point in the future. Today, the devs have announced a stream all about the RPG game this week, which is likely to reveal what we can expect from the Cyberpunk 2077 roadmap in 2022.

The stream will begin on Tuesday, February 15 at 7am PST / 10am EST / 3pm GMT on the official CD Projekt Red Twitch channel. “So, choom, how ’bout a date?” the devs ask in an announcement on social media. “We’ll talk things, y’know. You’re in? Preem!”

This event is branded as ‘REDStreams #2’. The previous REDStream was a roughly one-hour presentation from a handful of developers breaking down the details of the then-upcoming 1.3 patch, so it’s safe to expect a similar format here.

The Cyberpunk 2077 roadmap currently promises “updates, improvements, and free DLCs [sic]” in the first quarter of 2022, including a patch improving the console versions of the game for the PlayStation 5 and Xbox Series X generation.

For some upcoming PC games to check out in the meantime, you can follow that link.