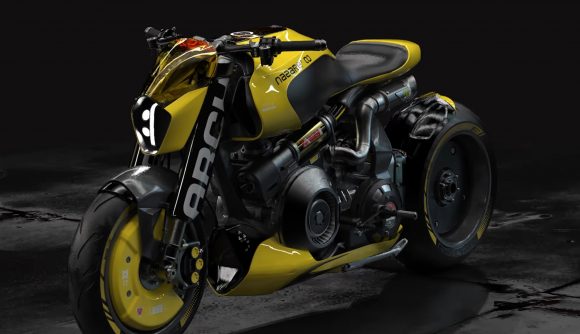 Keanu Reeves may be portraying Cyberpunk 2077‘s Johnny Silverhand, but his influence in the game doesn’t begin and end with voiceover and motion capture. In the latest episode of Night City Wire, developer CD Projekt Red revealed that Reeves has had a (silver) hand in the design of some of the open world game‘s vehicles – specifically, a souped-up motorbike that you’ll be able to tear up the pavement on.

In a featurette that debuted in Night City Wire Episode 4, Reeves and fellow Arch Motorcycle co-founder Gard Hollinger introduce viewers to the Method 143, an absolute monster of a bike that their Los Angeles-based company has designed. It’s a wicked-looking power cruiser that takes curvy milled aluminum, carbon fibre, and fine leather and wraps it all around a 2343cc V-twin engine that produces 170 horsepower. The complete package manages to pull off a look that’s futuristic, but with a distinctly throwback character – which fits perfectly with the rest of the Cyberpunk 2077 vehicles.

The Method 143 isn’t copied straight into Cyberpunk 2077, mind you – instead, it forms the basis for a new, cyberpunk-style Arch design, which you can see screaming around the Night City streets in a couple all-too-brief clips in the featurette.

“When CD Projekt Red approached me about doing Cyberpunk 2077, they also spoke about integrating – well, people who worked at the company were fans of Arch Motorcycle, and so they broached the idea of creating a specialised, Cyberpunk 2077 version of the Arch Motorcycle,” Reeves explains. “And I thought that was a very fine idea.” 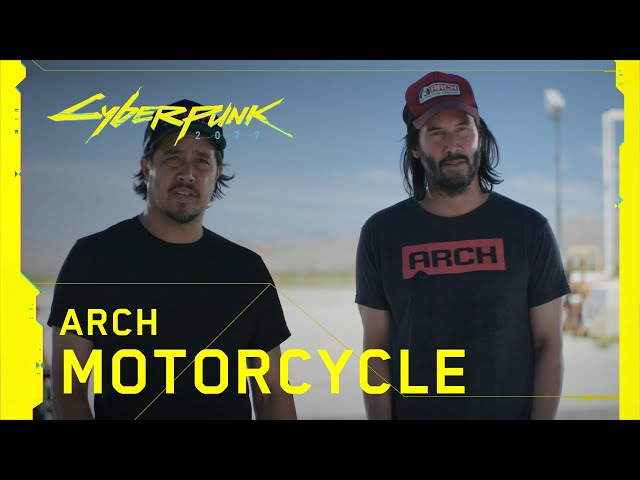 In the video, the custom Arch is shown in Cyberpunk 2077’s signature black and yellow paint scheme, with ‘Arch’ prominently displayed on the forks in white lettering. It appears to be called the Nazare Infinity or Infinite, based on some branding along the fuel tank. While the Method 143 inspiration is clearly visible, there are some big differences.

“They used that as a basis, and then went further,” Holliger says. “So it has a totally different, crazy-looking power plant.”

CD Projekt Red’s sound design team traveled to Hawthorne, California to visit Arch Motorcycles in order to capture the sounds used in the game – so what you’ll hear while you’re tooling around on the Nazare will be, deep down, the sound produced by a real Arch bike.

“We’re getting some actual sounds of the power plant, the drive train, the characteristics of the motorcycle, which I’m sure they’ll have played with and stuff,” Reeves says, standing beside an asphalt runway strip in a oily red cap and T-shirt. “But the source will be pure.”

The Cyberpunk 2077 release date is coming up next month.