6 January, 2021 CD Projekt Red has removed the memory_pool_budgets.csv file this method uses and dismissed claims that editing it improved performance.

Cyberpunk 2077 has had quite a turbulent release, with many praising the gripping story and sprawling open world while others have criticised its poor performance. Even those running Nvidia’s GeForce RTX 20 series saw frame rates dip way below the 60fps average they would expect on just medium settings, including yours truly.

As we wait for developer CD Projekt Red to push out patches that aim to fix these issues, the community has turned inward in an attempt to find a temporary solution. One such method came from Reddit, detailing how editing the ‘memory_pool_budgets.csv’ file could potentially lift limitations and make use of your system’s full resources.

CD Projekt Red has since removed this file, using its patch notes to explain it was simply leftover clutter from development that had no connection to the main game. Instead, performance increases “may have been related to restarting the game” according to the company, but you can find our original story below.

Original Story: It turns out some of these issues stem from the configuration files reserving the same amount of memory and VRAM on PC as they would on console, regardless of how much your system is running. Naturally, the developers over at CD Projekt Red likely have a hotfix inbound to put an end to the problem, but you don’t need to hang around twiddling your thumbs if you’re itching to play and don’t want to suffer through a slideshow.

Instead of frantically tinkering with Cyberpunk 2077’s PC settings to get a good frame rate, ThePhoenixRoyal details on the subreddit how you can dive into the configuration files yourself to change the parameters, but be warned that rummaging through your config files can potentially crash your game or Windows – so proceed at your own risk.

Make sure you don’t have the game booted before changing the config files.

The pathway to the Memory Pool Budgets config file you’re looking for will differ slightly depending on what platform you bought Cyberpunk 2077 on, but it should always be within the game’s engine and config subfolders. Let’s use Steam as an example here:

Open the file using any text editor, such as Notepad. What you’ll notice when you first enter is that ‘PoolCPU’ has 1,536MB reserved, which is a fraction of the 8GB needed to meet the minimum requirements. ‘PoolGPU’ is also 3GB across the board, making it the same as Durango and Orbis, which is what the Xbox One and PlayStation 4 run on respectively. 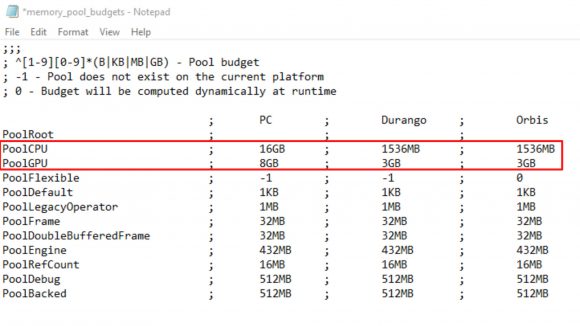 Ideally, you’d prefer your PoolCPU to equal half of what your total RAM capacity is – if you have 16GB, then you’ll want to bump the ‘1,536MB’ figure up to ‘8GB’ instead, for example. The PoolGPU, however, should be the full VRAM your graphics card can offer. It’s best to search for your exact model, but an example of this would be switching the ‘3GB’ up to ‘8GB’ if you own an RTX 2080. Once you’ve entered your desired values, save the document and then boot up your game.

This isn’t a catch-all solution for the performance issues you might be experiencing, and your mileage may vary when it comes to thwarting known bugs this way, but this method has vastly improved the experience for a few players here at PCGN.

However, after some further digging, it seems as though this is the memory reservation and not actually a limitation of the budgets, meaning both the RAM and VRAM bandwidth can already exceed the figures here – it just won’t explicitly reserve the amount it wants to use until you change it. This means that those of you inclined to have browser tabs open or perhaps another few applications running in the background should see a greater difference in frame rate when altering this config file than players that close everything before booting the game.

Further testing is required before we can say for sure whether this improves the Cyberpunk 2077 experience, but there are enough players that swear it works to make it worth trying.