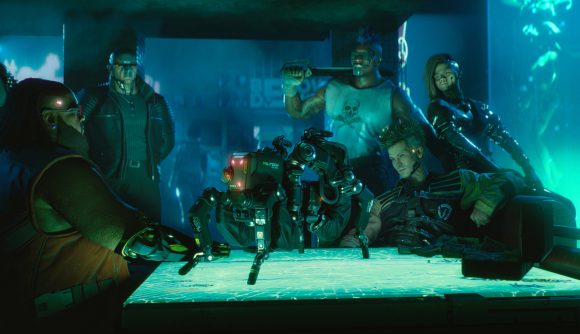 Over the weekend, Cyberpunk 2077 players noticed that their save files were becoming corrupted and unusable. This corruption would often happen towards the end of the game, and when players had done a lot of crafting. A new patch, hotfix 1.06, addresses this issue, but won’t repair saves that are already corrupt.

On PC, the 509 MB hotfix removes the 8 MB limit on the RPG game’s save file sizes, which presumably means that new saves made from this point on won’t become corrupted. Unfortunately, your corrupt save files are going to remain unusable, at least for the time being. The patch also requires additional free space on the drive where you’ve installed Cyberpunk 2077 in order to update, but if you’ve purchased the game through GOG, you can choose an alternate ‘temporary game update folder’ if GOG Galaxy detects insufficient free space.

Hotfix 1.06 also fixes a quest bug in Second Conflict that would cause the character Dum Dum to go missing from Totentanz entrance. That bug made it impossible to complete the quest, so it’s a relief to see that it’s been fixed.

Over on consoles, hotfix 1.06 offers “improved memory management and stability, resulting in fewer crashes”, which hopefully will make Night City life for our beleaguered Xbox and PlayStation compatriots a bit easier.
If you’re looking to fill out your arsenal, check out our guide to Cyberpunk 2077 weapons, and if you’d like to know how to get the secret final scene, look no further than our Cyberpunk 2077 endings guide.