Throughout your playthrough, you’ll find a number of clothes, equipment, and weapons to turn into crafting materials. Not only can you use these materials for upgrades, you can also create brand new items. The best part is that you can stop to craft an item at almost any point in the game (providing you aren’t in the middle of a fight). There aren’t any crafting tables in Cyberpunk 2077, you only need to head to the crafting panel in the character menu.

One thing to keep in mind is that your Cyberpunk 2077 build and a number of perks play a large role in the crafting system. With the right perks equipped, you can break down materials more efficiently in order to get the most out of your scrapped items.

You’ll unlock the ability to craft items during the game’s prologue, but there won’t be too much to create just yet. You can improve your crafting proficiency by allocating points into the Technical Ability attribute. It’s also important to invest a certain amount of perk points into the crafting skill tree. If you want to open up more crafting perks, you need to become more proficient in the skill by using crafting in the world, which allows you to unlock more options as you continue to progress through the game. 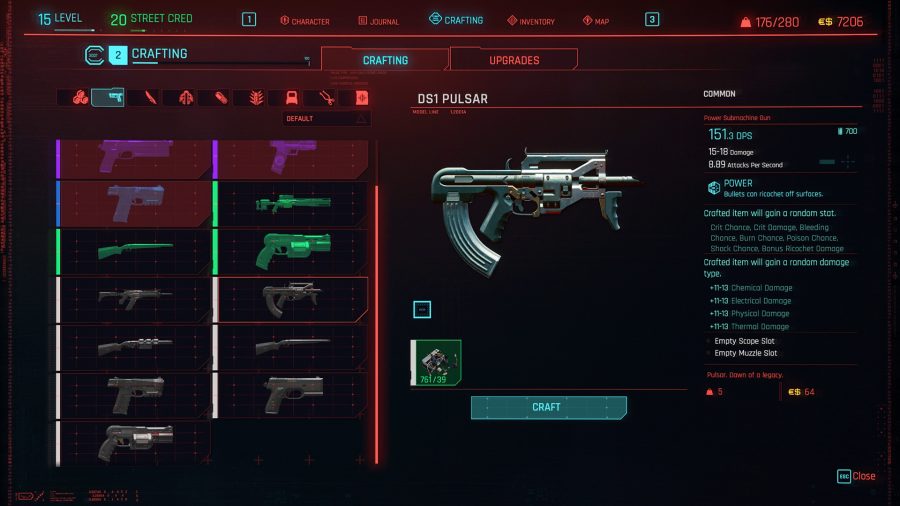 There are multiple ways to gain the materials required to craft items and upgrades. The easiest way is to pick up items off the ground, as in literal trash. Ashtrays, cards, even lipstick can be used as scrap material, the perfect items for crafting general items. You’ll also find random materials dotted around the world, though this isn’t as efficient as breaking down your own items. Finally, you can simply purchase the exact materials you need from vendors, though this can become quite expensive in the long run.

What perks to buy and why

Though they’re far from the most glamourous perks, we’d recommend picking up the following upgrades as early as possible:

Picking up these two passive perks at the beginning of the game allows you to start earning crafting components early on. After taking out large groups of enemies, your inventory will quickly reach capacity forcing you to drop some items or better yet, disassemble them instead.

Once you’ve reached a high enough level, you’ll be able craft better items as long as you pick up these perks:

Blueprints are essential to crafting – without blueprints you’ll only be able to upgrade your gear and craft low level items like ammo. Creating any item requires a blueprint, and you can find these blueprints in the same way you’d find materials: purchased from vendors and found as loot. It’s worth bearing in mind that there are a number of exclusive blueprints available, but you’ll need to invest points into the crafting skill perk tree to unlock them.

Here’s everything you can create using the crafting system:

You’re incentivised to craft your own weapons rather than loot them from enemies with a stats upgrade. Depending on your crafting skill level, your custom-built weapon will gain a stats boost compared to the factory-made weapon. There are incredibly powerful weapons locked away behind the crafting perk tree, so opting for this path will reward you heavily in the long run.

How to get infinite crafting components

Want in on a little secret? The crafting system in Cyberpunk 2077 can be exploited rather heavily, resulting in potentially unlimited components, which in turn also means infinite money! There’s a few ways to game the system, but here’s probably the simplest:

Is it time consuming? Very much so. Will it get the job done? Absolutely! 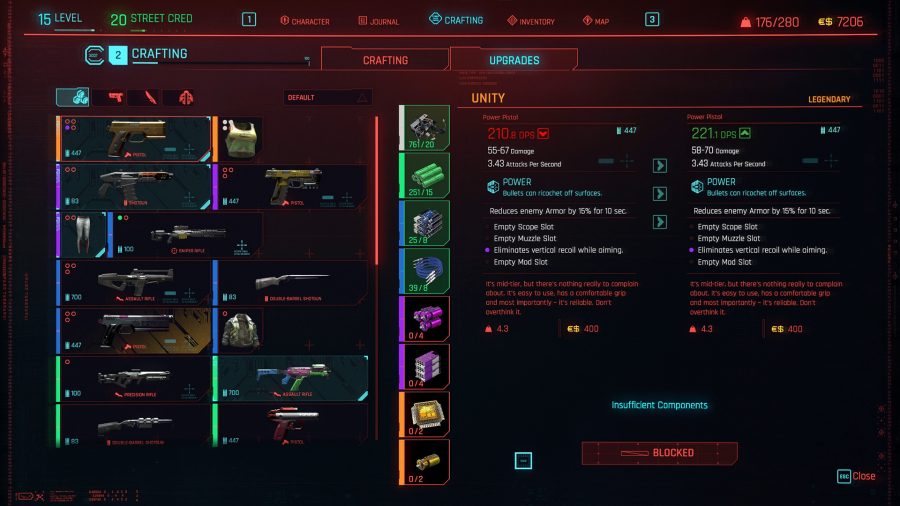 Though it’s easy to find weapons on the ground and use them throughout your playthrough, upgrading your own reliable weapons can be a better alternative. When you upgrade an item in Cyberpunk 2077, you improve its level which raises the item’s stats. As you level up your crafting ability, the amount of stats added to the item increases each time you decide to go through the upgrade process. This allows you to keep weapons you’ve grown attached to instead of having to ditch them for other weapons with slightly higher stats.

And that’s all the information you need on crafting items and upgrades. Be sure to check out our Cyberpunk 2077 hacking and quickhacking guides, two skills that may suit players going for an intelligence-based build.