At Gamescom this year, Cyberpunk 2077 developer CD Projekt Red showed off four pieces of concept art for the sci-fi RPG. Apparently innocuous, these artworks had hidden inside of them the URL that would end up teasing the public gameplay reveal. But while CD Projekt Red gave us a look at the images  that inspired the game’s E3 trailer, it turns out there’s plenty more info about the game’s world inside them, all you need is a careful eye.

The concepts on show are a brilliant realisation of the futuristic dystopia that Cyberpunk 2077 is built within. There have, however, been some major changes that have taken place between the few years it took to translate those artworks to in-game screens. What we saw at E3 was, in some cases, quite different to the ideas that the concept art originally presented – as you can see below, as we pair each piece of concept art with its accompanying shot in the trailer.

In many cases, it’s what’s not there any longer that proves more interesting than what’s still on show. With that in mind, it’s very possible you missed these small nuggets of information hidden away inside the finer details. Let’s delve into see what they can tell us about Night City.

The first concept grew into the scene in the trailer that features a cyborg woman who is missing the lower part of her face. That’s clearly the focus of the shot: showing off how banal augmentations have become in the world of Cyberpunk 2077. When you take a look around the rest of her room, however, there’s plenty more to see, particularly if you head into the concept art.

In the top left corner of the image, there are a host of newspaper cuttings and photos of a blue-haired woman – much like the woman in the mirror, except this time with face fully intact. The headline of the cutting reads “Arasaka [a Cyberpunk megacorporation] CEO dating famous actress.” 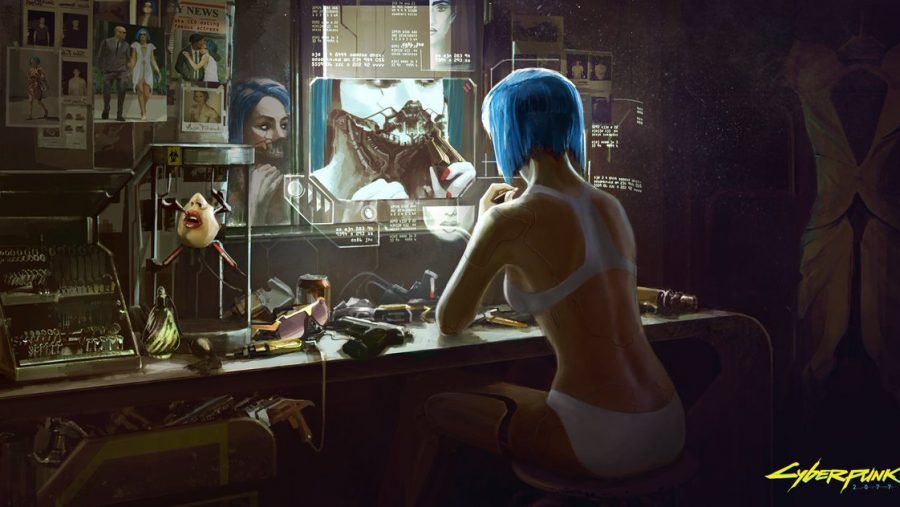 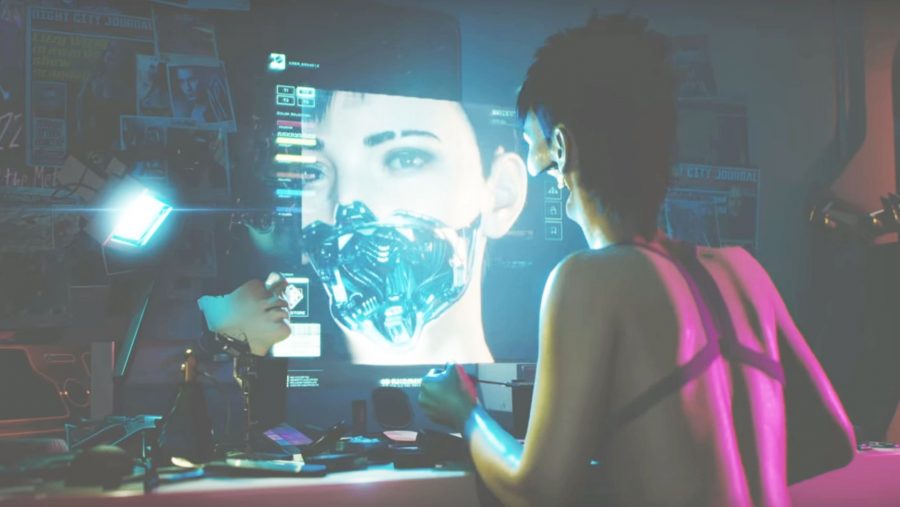 There are a few things that seem a little off about this. The first is that this does not look like the room of a glamorous actress who would be dating a powerful CEO. The second is that I imagine most starlets don’t have articles and paparazzi shots of themselves strewn clumsily across the walls of their dingy bedrooms. Furthermore, if you cast your eye across the rest of the image, you’ll see a gun on the dresser, and the dress that the actress is wearing on the right of the image. It’s a well-known aspect of the game’s lore that megacorporations are almost constantly at war with one another, and it wouldn’t surprise me if this art is intended to indicate how often body transformation and augmentation can be used aggressively, rather than simply cosmetically. Is the woman in the dressing room changing her appearance to pretend to be her as part of a covert operation?

If you look at the shot from the trailer (which I’ve taken the liberty of brightening), the photos of the actress are gone, replaced with newspaper clipping reading “Lizzy Wizzy in Awards Show Scandal.” Lizzy Wizzy is the chrome-clad frontwoman of an in-game band, Lizzy Wizzy and the Metadwarves, and she turns up in another shot in the trailer. The woman in this shot, however, is not chrome-clad, but on the right of the image you can see another dress, which just so happens to be the one that Lizzy is wearing in her moment in the limelight. I can’t see any evidence of a gun in this shot either, so I’d imagine that this shot is trying to tell us more about the nature of celebrity and aug-based replication in Night City.

All ready to go

The second image shows a ‘Combat Cab’, a Night City taxi that seems custom-built to help violent criminals move around the city. Not a lot changed here between concept and realisation, but there are a few things to pick up on. 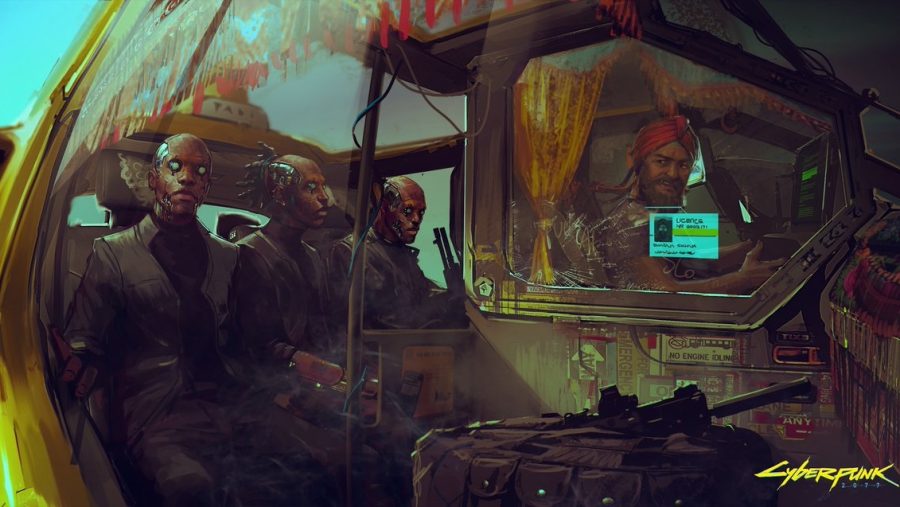 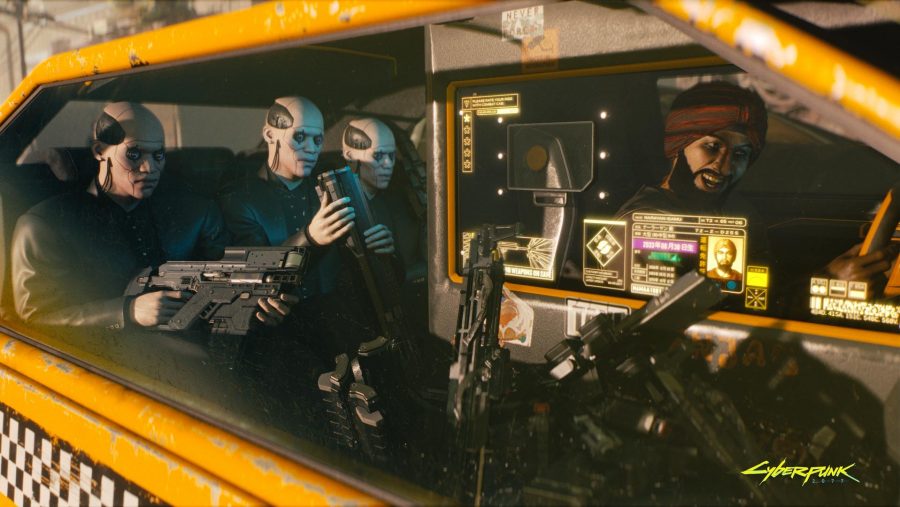 The first is that the augmented people in the concept art have become even more robotic by the trailer. They also seem to have many more guns in the second outing.

The second is that the paraphernalia on the side of the driver’s booth has developed, revealing the name of another character – Narayan Isamu. There’s even an Uber-style “please rate your ride with Combat Cab” system embedded in it.

In the concept art, there’s not all that much to add to these observations, other than a sticker reading ‘No engine idling’, suggesting that Night City’s residents are concerned with their carbon footprints, and that Combat Cabs might take you where you need to go, but they won’t wait around for the fighting to start.

I make my own rules

In the trailer, the third image shows a main character, Jackie, sitting in a busy street. In the trailer, there’s not much to see, other than the fact that he’s holding a gun and has a questionable man bun. There’s little to take away from this particular shot. 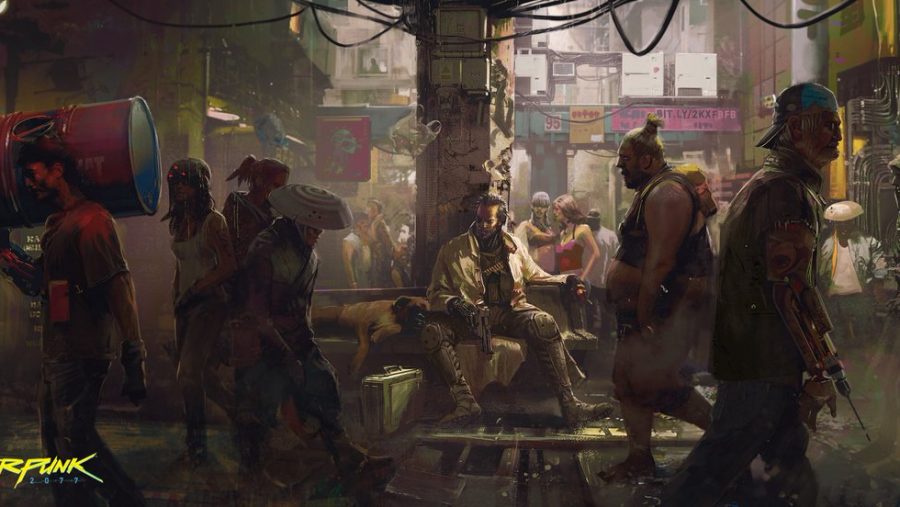 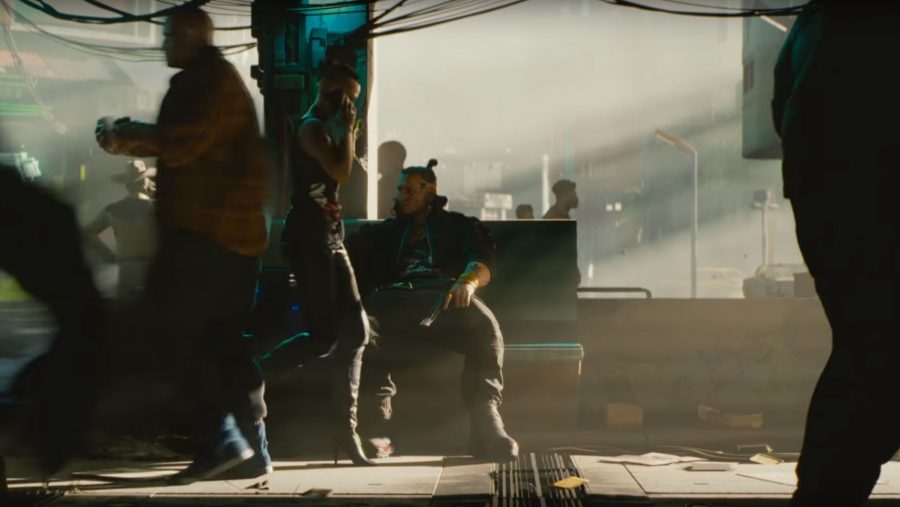 But when we go to the concept art there’s a lot more to see. Panning from the left, the female figure second in seems to have what looks like modern-day night-vision goggles, which may or may not be a physical augmentation. Moving across, right next to ‘Jackie’ is what seems to be a Boxer dog, suggesting that early concepts offered the game’s hero a pet. Moving further across, in the top-right corner is a pink sign with a bit.ly link. That link ended up being the first clue in a lengthy ARG, which teased the first public showing of the Cyberpunk 2077 gameplay demo.

There’s also a man with an augmented right arm, which seems to be fitted with a power drill. That, coupled with the woman in the image, would suggest that augs aren’t just for violence – they can be built in as useful tools for people to use in the course of their day-to-day lives. Finally, you can see two people wearing similar hats – one on the left of the central figure, and one directly on the right of the man with the drill for an arm. Those hats are pretty noticeable, and likely speak to CDPR’s suggestion that you’ll be able to recognise what affiliation different characters have based on their dress and movements.

The final image shows what we think is a depiction of a technology developed by another Cyberpunk 2077 megacorporation. The tech allows people to access and steal another person’s thoughts via the internet, and was developed by a character called Alt Cunningham, before it was stolen by a megacorps called Militech.

With the tech in its control, Militech weaponised it and killed Cunningham. There are two moments in the trailer where we think you can see that happening – at around 1:07 at 1:11. The latter of those can be seen in the last piece of concept art, but there have been some significant changes. 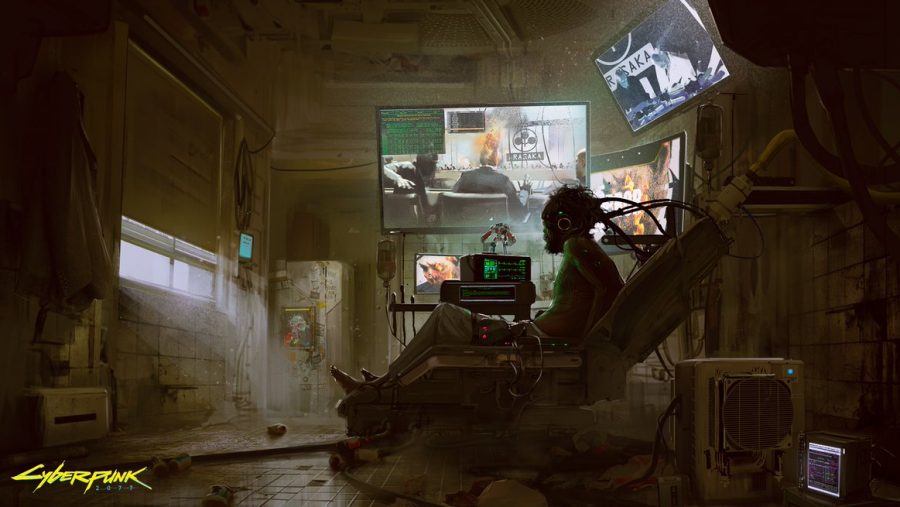 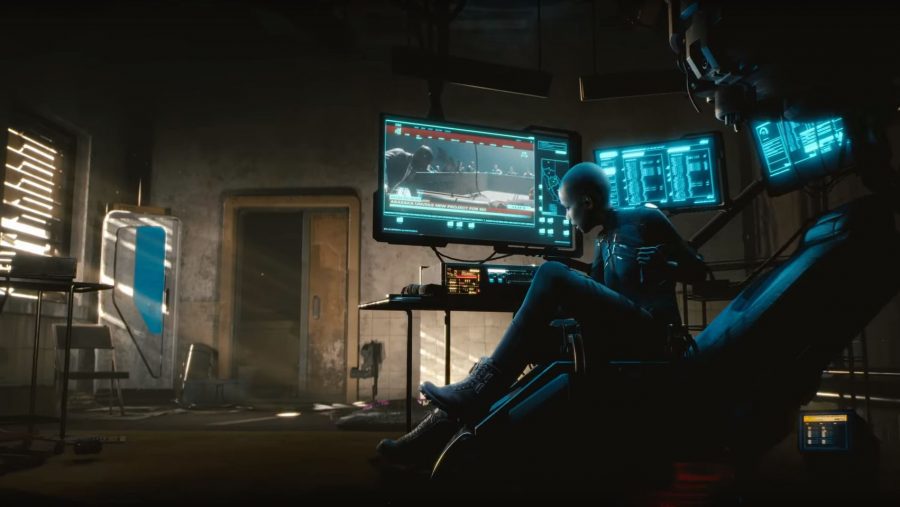 The concept art shows a man plugged into a machine in a dingy room packed with TV screens. On those screens, you can see what looks like a board room meeting. One issue, though, is that you can see the central figure in that meeting’s head has exploded. In the background, you can see the Arasaka logo, suggesting this is an act of corporate violence.

Head to the trailer and much of the setting is very similar, other than the fact that the male character has been replaced with a bald woman – whose identity is a mystery, and the screens now show what seems to be live news coverage of the event.