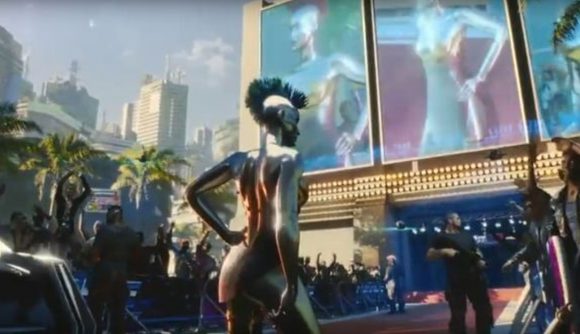 Despite rumours to the contrary circulating earlier this year, it seems that pop star Lady Gaga will not feature as an NPC in Cyberpunk 2077. In an interview with wccftech, UI co-ordinator Alvin Liu dismissed reports of the star’s involvement.

When asked about the rumours, Liu said that the Grammy and Oscar-winning artist is “pretty cyberpunk, so she could fit in.” Sadly, however, he went on to say “but um, yeah, no Lady Gaga.”

Speculation around the star’s involvement sprung up last year, when the Cyberpunk 2077 Twitter account enthusiastically responded to a cryptic Lady Gaga tweet from 2012. Back in March, the singer and actress was spotted at developer CD Projekt Red’s Warsaw headquarters, and sources speaking to French website Actugaming (translated via Google) said that the singer would “participate in Cyberpunk 2077,” and that her involvement would be confirmed during E3. Sadly, of course, that proved not to be the case.

Instead, of course, we’ve had to ‘settle’ for Keanu Reeves, who will have a significant role in the game as the digital ghost of deceased rockstar Johnny Silverhand.

Gaga might have been a good fit, and it would have been fun to see her star alongside Reeves, but I suppose it simply wasn’t meant to be. CDPR is clearly keen to develop its mainstream potential however, as earlier this week, quest director Mateusz Tomaszkiewicz said that he’d like to see Meryl Streep take on a role in the upcoming RPG. I’d say that at this stage in development, getting her on board seems unlikely, but you never know what CDPR might manage to pull off.