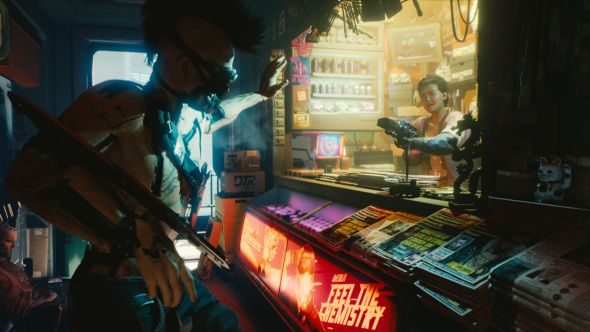 Cyberpunk 2077’s main character will be voiced, in much the same way as Geralt from The Witcher series. In an interview about CD Projekt Red’s upcoming game at E3 2018, associate designer Kyle Rowley confirmed that there will be both male and female voices for the game’s main character, a hired gun named V.

Rowley says that that decision was made as CD Projekt Red has found that a voiced chracter makes it easier for a game’s players to form meaningful and close realtionships with the characters they’re playing as.

Cyberpunk 2077 is shaping up to earn a spot on our list of the best RPGs.

We learned a lot from Rowley’s brief presentation. For one thing, we found out that Cyberpunk 2077 is a first-person RPG, but we also know much more about Cyberpunk’s main character – V is a hired gun, but you can choose the gender of your Cyberpunk protagonist. There’ll even be a full Cyberpunk 2077 character creator, which will allow you to pick details like body type, tattoos, and make-up.

You can check out the most recent Cyberpunk 2077 trailer below:

The Cyberpunk 2077 release date is still up in the air, although we’re expecting to see it around the middle of next year. Rowley said that CDPR is prepared to talk more openly about the game now, so hopefully we’ll hear more in the coming weeks.