The dild in question is called ‘Sir John Phallustiff’ – a reference to Sir John Falstaff, a lecherous knight from a few of Shakespeare’s plays. It’s also a Cyberpunk 2077 iconic weapon – which means you can upgrade it throughout the game; even as you level up, your generously sized marital aid should always be by your side.

Fortunately for your foes, the weaponised peen does non-lethal damage – perfect for those sensitive jobs where you need to keep your target alive. It’s also a blunt weapon, so will be buffed with Cyberpunk 2077 perks from the Street Brawler skill tree, should you choose to commit to the chub club throughout your playthrough. The version we found had 313.5 DPS, and an empty melee mod slot. Here’s how to get your very own – be warned; there are Cyberpunk 2077 story spoilers ahead. 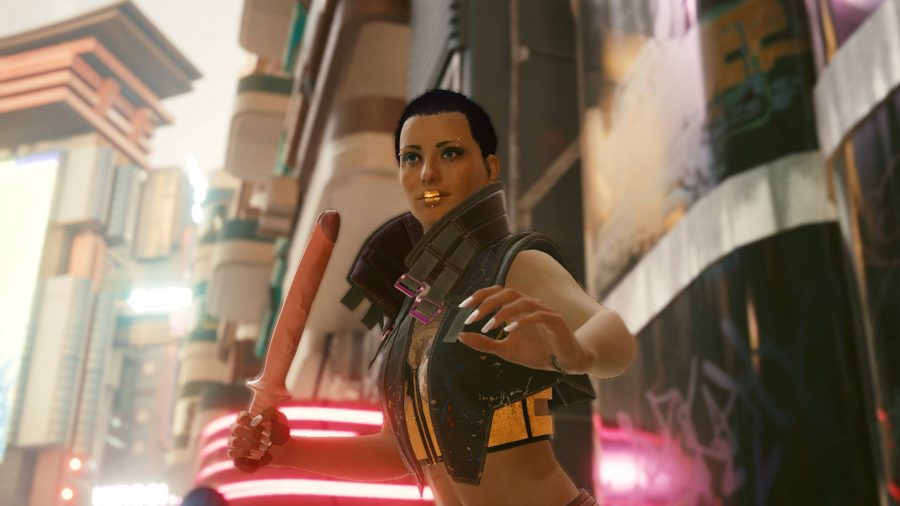 Your golden opportunity comes courtesy of Meredith Stout, the Militech corpo who you meet during ‘The Pickup’ mission. If you ended things favourably with Meredith – by killing Maelstrom so she can recover her shipment – she’ll send you a flirty text later down the line, which will initiate the ‘Venus in Furs’ quest. She’ll ask you to meet her at the No-Tell Motel for a passionate romp, and after the Cyberpunk 2077 romance scene concludes, you’ll find she’s left behind Sir John – perhaps as a gift. Lucky you. Once equipped, you’ll notice the phallus emits a low, steady buzz, which gets louder as you swing it deftly through the air, like a turgid, fleshy lightsaber.