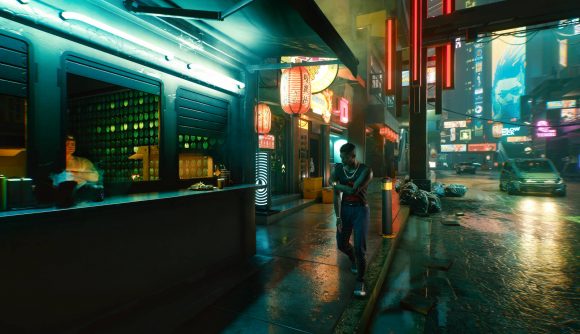 Cyberpunk 2077 is littered with nods and references to sci-fi and videogames, and some that go beyond that, too. One keen eyed player has found an Easter egg for The Office – the US version – within the streets of Night City.

Posted on Reddit by u/Racketygecko, a post-mission conversation in the RPG game is basically a beat-for-beat redo of a memorable gag from The Office. It comes after the side-quest ‘Big In Japan’, where V has to retrieve and bring back a package from the docks. This is no ordinary payload, of course, as it turns out to be a person, that you’ve to keep alive as you break them out and bring them back to Dennis, who eagerly awaits the arrival of Haruyoshi, a world class brain surgeon.

If you hang around to hear why you had to save him, you get the Easter egg in his explanation. Haruyoshi tells a story about accidentally killing a Tyger Claw boss on the operating table, and coming to America after. Except, it was no accident, because the world’s best surgeon makes no mistakes. Some minor alterations aside, this whole bit is from an episode of The Office, ‘Happy Hour’, in Season 6, involving Craig Robinson’s Darryl Philbin, and Hidetoshi Imura’s Hidetoshi Hasagawa, whom Dennis and Haruyoshi are based on here, respectively.

Here’s the two clips played one after another:

“The Office” Reference In Cyberpunk from r/cyberpunkgame

We found a cheeky poke at Half-Life 3 in Cyberpunk 2077. The open-world game has had a massive launch this week, becoming the biggest single-player release in Steam history, and doing very well in China, despite not being officially available there. We’ve guides on Cyberpunk 2077 character customisation, Cyberpunk 2077 vehicles, and Cyberpunk 2077 weapons, so you’re well equipped for anything Night City throws are you.