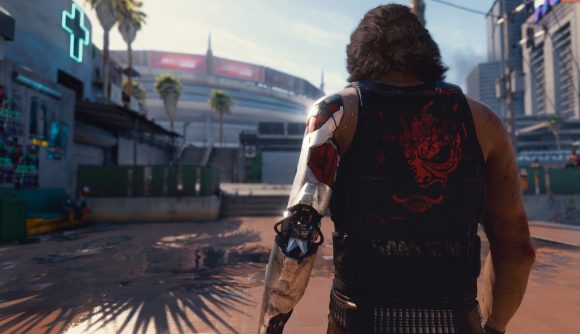 We already knew Cyberpunk 2077 DLC would be revealed after the RPG game's imminent launch (you can order the game at Humble here), with CD Projekt Red president Adam Kiciński announcing the news in a recent earnings call. Now, we have a more specific window on when we can expect some free DLC to start arriving, as well as what's in store for the game expansion-wise – and, it turns out the answers are in a hidden statement in the new PC game's launch trailer.

Check out the Cyberpunk 2077 launch trailer below at around the 2:09 mark, and you might spot it – there's a message from CDPR tucked away in a single frame; blink and you could easily miss it. “We've mentioned before that expansions will be coming,” it reads, “and while we're not ready to talk specifics just yet, we will say that we've learned a lot from our work on both Hearts of Stone and Blood and Wine” – the two expansions for its previous behemoth open-world game, The Witcher 3.

“Our planned expansions will take you even deeper into the world of Cyberpunk 2077, offering substantial, story-driven content that'll give you tough choices to make through impactful narratives that you won't soon forget,” the message continues.

Between them, the two Witcher 3 expansions added entire new locations, characters, monsters, quests, gear, and more to the game, bringing even greater depth to the already expansive RPG. So, it’ll be mighty exciting to see what CDPR has learned from crafting them, and what it’ll bring to Cyberpunk’s world when the time comes.

However, before these expansions arrive it seems CDPR’s got some free DLC in store for players early next year, explaining it’ll be “kicking off [its] free DLC program in early 2021. Just like The Witcher 3, expect an assortment of free DLC packs to begin hitting Night City, dropping a bunch of cool stuff that’ll inject even more life into the world of the dark future.”

You can order Cyberpunk 2077 on the Humble store by clicking here.