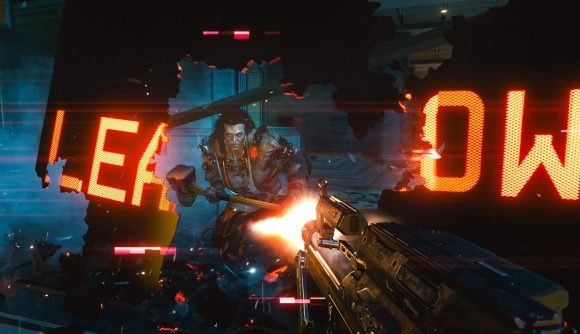 It came as quite a surprise to many fans of developer CD Projekt RED when Cyberpunk 2077 was announced as a first-person RPG a few years’ ago. The studio made its name from The Witcher series of RPGs, which were all entirely third-person – so to see it change to a completely different perspective was a big shock.

Well, the perspective-based shocks are still coming, as according to CD Projekt RED there will barely be any trace of third-person perspective when the Cyberpunk 2077 release date rolls around. Fellow future first-person RPG Deus Ex, for example, still had third-person in cutscenes and occasional gameplay moments – but Cyberpunk 2077 is apparently going “100% first-person”, even during the sexy bits.

This is despite the fact that the game will have a full character customization sequence, and that all of Cyberpunk’s promotional videos up until now have shown the main character in full – including the E3 demo that introduced Keanu Reeves. Despite all this, it seems the only way in-game that you’ll be able to see your character is in mirrors.

This is according to Marcin Momot, Global Community Lead at CD Projekt RED. He confirms that the reason to make the game completely first-person is for “full immersion” and to benefit the experience “from gameplay and story-telling perspectives.” You can see the full tweet below.

2/2 That said, players will still be able to see their characters in the inventory screen, during driving sequences, in mirrors and, very occasionally, in some of the cut-scenes.

Outside of mirrors and the character screen, players can apparently see their character during driving sequences and “very occasionally” in cutscenes – although we’re not sure if that means the cutscenes will outright show the character in third-person, or whether they will remain first-person but the player will be able to see themselves some other way.

Momot’s tweets were backed up by the official Cyberpunk 2077 Twitter feed. User 100K on the CD Projekt RED forums posted an image of his message to the official feed, which confirmed that not only were cutscenes in first-person – sex scenes were, too.

While CD Projekt RED is trying hard to make its game accessible to non-first-person fans, it seems to be doing that while still making the game as first-person as possible – which not everyone will be happy with.