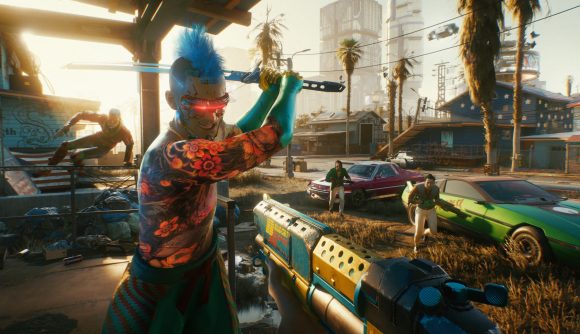 We’ve known since before launch that Cyberpunk 2077 would get free DLC early in 2021. We’ve known since after launch that Cyberpunk 2077 is fairly buggy on PC, and an absolute mess on consoles. It looks like the free additional content is still on track for the next few months, though, as developer CD Projekt Red has quietly updated its official site to confirm an early 2021 rollout.

“Free DLC starts hitting Night City early 2021,” CDPR says on the recently-updated official site. “Stay tuned for more info!” It looks like that’s all the detail we’re getting for now. The console versions are due for two major patches in the coming months – one in January, and one in February – though it’s not clear if the PC updates will be on the same schedule. (So far, the early hotfixes on all platforms have been roughly comparable with each other.)

CDPR originally discussed the early 2021 release for the free DLC in a secret message hidden in the game’s launch trailer. “Just like The Witcher 3, expect an assortment of free DLC packs to begin hitting Night City, dropping a bunch of cool stuff that’ll inject even more life into the world of the dark future.”

There are also major paid DLC expansions in the works, but I expect we won’t be hearing much about those until quite a few more patches land.

There are more excellent open-world games and RPG games to enjoy as you await further patches and additional content, of course.