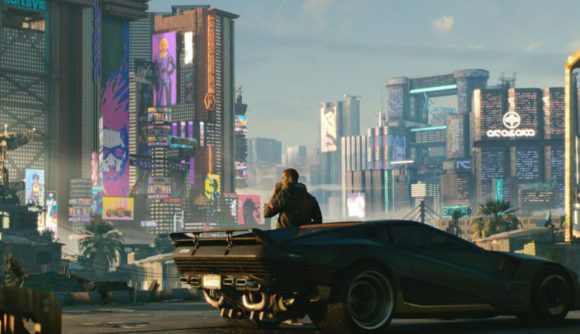 Cyberpunk 2077 is out, and it’s good – but it’s also kinda busted, especially on consoles. Plenty of the early glitches are leaning far more toward game-breaking than funny, but let’s be real for a minute: some of them are extremely funny. Especially when they’re cut together over the bombast of that E3 2018 trailer that kicked the Cyberpunk 2077 hype into overdrive.

“In 2077, they voted my city the worst place to live in America,” V tells us. “Main issues? Sky-high rate of violence, and more people living below the poverty line than anywhere else. Can’t deny it – it’s all true. But everybody still wants to live here. This city’s always got a promise for you. Might be a lie. An illusion. But it’s there, just around the corner, and it keeps you going.” Strangely prescient words given the current state of the game.

Now, put all that dialogue over top of cars randomly screaming through the sky, cowering civilians disappearing the second your back is turned, enemies dropping out of combat as you continue to pelt them with shotgun fire, and trees sucking you into the abyss. (That car bomb thing might actually be a scripted event, but still, it’s very funny here.)

Check out the video below, courtesy of Papar_RZ_2T on Reddit.

I complied these goofy gliches footages into a trailer. from cyberpunkgame

A certain official tweet has also been making the rounds lately…

Whole game is going to be a meme.

Check out some of the best RPG games on PC while you’re here, why don’t you?