It’s all too easy to forget that Cyberpunk 2077 is an RPG first and foremost. From a glance, you’d be forgiven for thinking it’s a stylish first-person shooter, an open-world game like Grand Theft Auto, or a Deus Ex-inspired immersive sim. As the delays will attest, this is a ludicrously ambitious undertaking.

However, after playing Cyberpunk 2077 for four hours it’s clear that while there are hints of all of those genres, this is a role-playing game through and through. Choices are built into every nook and cranny of Night City, and every decision you make when developing your V – whether that’s the character build you spec towards, the clothes you wear, or the bars and clubs you visit – will affect how your story unfolds.

We spoke to level designer Max Pears about our lengthy Cyberpunk 2077 hands-on session, the challenges of building shooting and driving mechanics for the first time, Witcher 3 easter eggs, and the experience of writing a single-player story that doesn’t neglect player choice. You can pre-order Cyberpunk 2077 on the Humble store here.

PCGamesN: How much does the Life Path choice affect the game?

Max Pears: The idea is that this is all about creating your very own cyberpunk, so having that Life Path choice is going to play into that. Not just necessarily what you saw in the demo but also throughout the game.

That will come in the form of different dialogue options, but there will also be specific quests tied to these Life Paths as well, which you’ll find later on in the game. Life Paths might also unlock different conversations that open up new reactions to help shape the outcome of the mission that you’re playing. 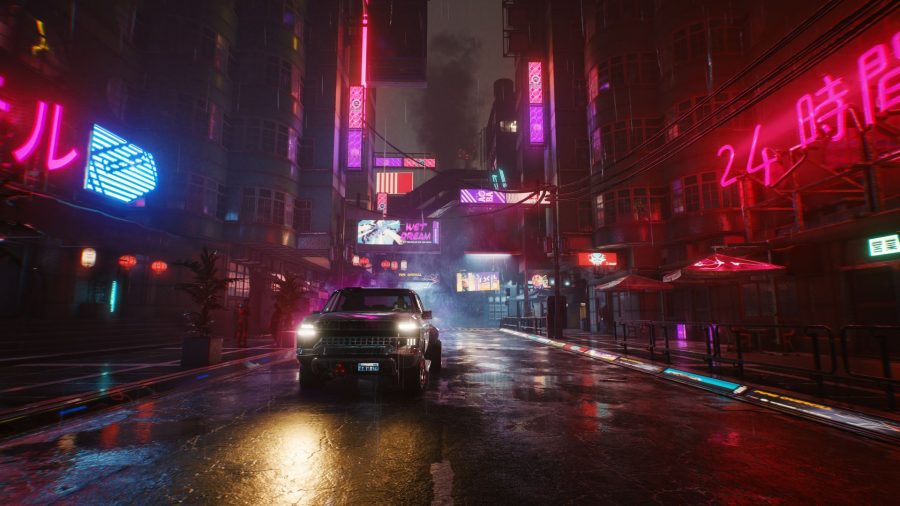 What Life Path did you choose?

I went for Corpo…

With that one you don’t get an option to gain additional credits from Meredith Stout, but if you’re playing as a Nomad then you’ll get to negotiate with Stout to earn more.

At what point do these Life Paths converge? As a Corpo I started in Arasaka Tower, would that have been totally different if I was playing as a Nomad?

Yeah, exactly. But each quest and side quest will also have different areas where your Life Path – and sometimes skill tree choices – will have an impact. As for how much it impacts things, that depends very much on what quest you’re playing.

As a single player, open world game, I’m sure a portion of the team felt right at home bringing Night City to life. How has the experience of making a first-person shooter with driving mechanics for the first time been?

I’d love to say it was all smooth sailing and we nailed it the first time, but it’s been hard work and we’ve relished the challenge. After everything with The Witcher series, the team was looking for something new to try and a new challenge. One of the biggest challenges has been thinking about these elements.

There will be things to learn from in terms of getting the feeling of driving and shooting right, because at the end of the day it’s a first-person shooter, but it’s also an RPG. So you’ll see numbers popping off enemies – which you can turn off – but we also need to make headshots feel impactful when you land them. Finding that balance has been the key challenge for us. 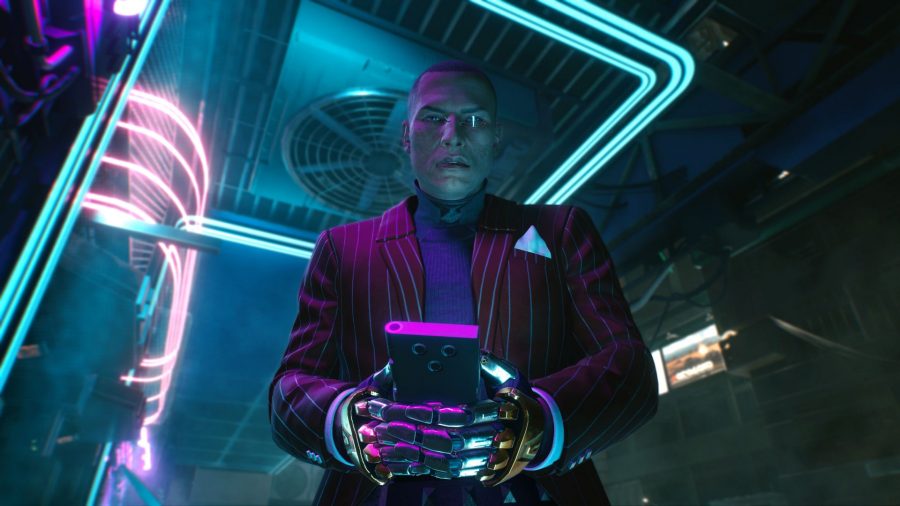 It’s something we asked for, that’s why we wanted to switch to Cyberpunk: to try something new.

What games did you turn to for inspiration when designing the pacing and weapon feel for Cyberpunk 2077?

It’s an odd answer, but honestly the biggest inspiration was the tabletop game itself. Anyone who has played the tabletop game knows that the amount of solutions you can come up with by using your imagination is something that your CPU and GPU can’t compete with. The most interesting part for us is trying to integrate player choice – whether that’s Life Paths, upgrades, or even how you’ve handled previous missions – all of these have inspired us when it comes to translating the feel of the tabletop game to Cyberpunk 2077 itself. As a level designer it’s been one of the coolest things for me creatively to learn from.

To me, the combat felt more methodical and tactical than I had anticipated. From a level designer’s perspective, do you want to dissuade players from running in gung-ho?

the biggest inspiration was the tabletop game itself

Providing those options has been one of the biggest challenges. If you do want to go in guns blazing, that is an option – you can upgrade your character to carry heavier weapons. You can build into a Solo like Jackie, run in, and smash people up – that is an option, we’ve built that so there’s cover for you, too. We’ve also got those elements that allow you to play it slow and methodical, so we’re excited to just see how players decide to approach it, but we’ve kept in mind while building the levels that we want to be rewarding and not neglecting certain playing styles. 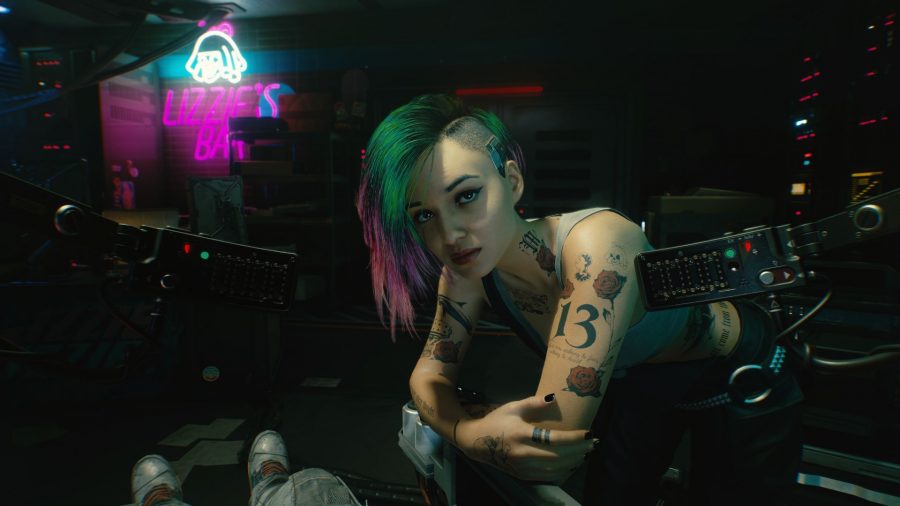 The other thing is that we’ve got a fluid class system, so you can mix and match the two extremes. You can go in shooting one minute and then take on the next combat area slowly. There’s always a chance to take a moment and recompose before heading into the next fight.

Do you think pure builds will be viable?

It’s a viable option for you, but I think most people will want to pick and choose between the different attributes and skill trees. That’s where a lot of the fun comes from, is finding your favourite playing style, like going in stealthy only to fall in love with a gun you’ve found and then speccing around that. Hopefully people will experiment, we want them to.

How do you cater to these styles out in the open world?

There’s a lot of detail in the open world. I’m genuinely amazed by it and what we’ve done with it. Even though our open world might be like smaller contained areas, the amount of options hasn’t been neglected at all. The amount of stuff you can still do out there is impressive in its own right, and that’s another thing we’re really excited to see – watching people discover how diverse the open world is and not feeling like they have to approach it in any one way. 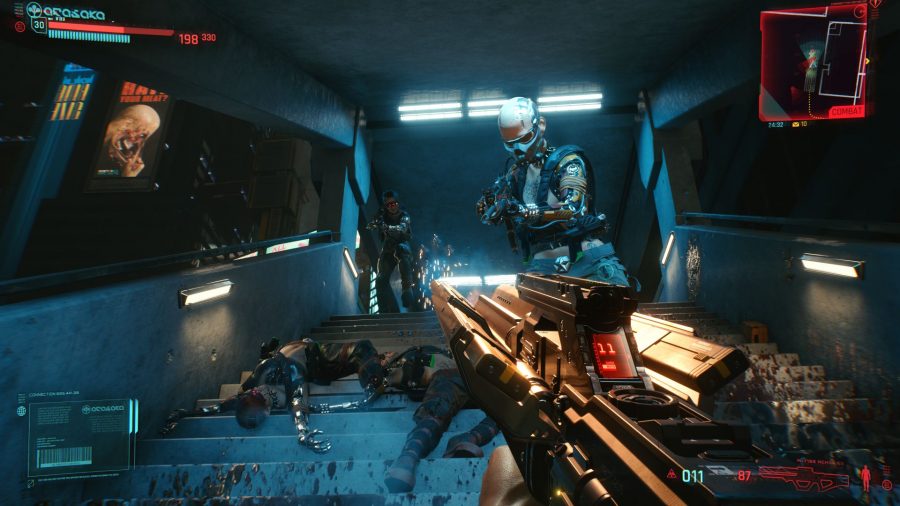 You can still take a car and go run people over, head out guns blazing, or hack objects to distract people. It’s really impressive how much detail there is out there.

I was relieved to discover you can steal cars and create utter chaos across Night City. Cyberpunk is definitely more po-faced than the GTA series, is this kind of player behaviour something you want to discourage at all as it might feel at odds with the game’s themes?

If you want to go out on a rampage and have no remorse, then you have got the option, and that’s fine with us. However, once you start to play the missions and see the amount of options you have, I think that will make players stop and think a little bit before doing something reckless. We’ve seen a lot of people default to that ‘GTA mode’ and then after a little bit they realise how many things are different and adjust how they play.

A lot of open world games struggle with that contrast of macro and micro scale. What’s Cyberpunk 2077’s approach to this?

For me it’s the density of the city. The people you see in the city and how many of them are present changes based on the number of dangerous events, the time of day, and the district you’re in. We showed Pacifica last year, which is a really lawless section of the world, and if you compare that to the City Center section you played in where there was a heavy police presence, you’ll see and feel that.

Hopefully players will see how the city is alive with different things you can just stumble into by chance, so I think people will be impressed and will love what they experience in Night City. I really hope people see that density, not just in terms of how the city is layered, but also in terms of what you’ll find just by running around and talking to different people. 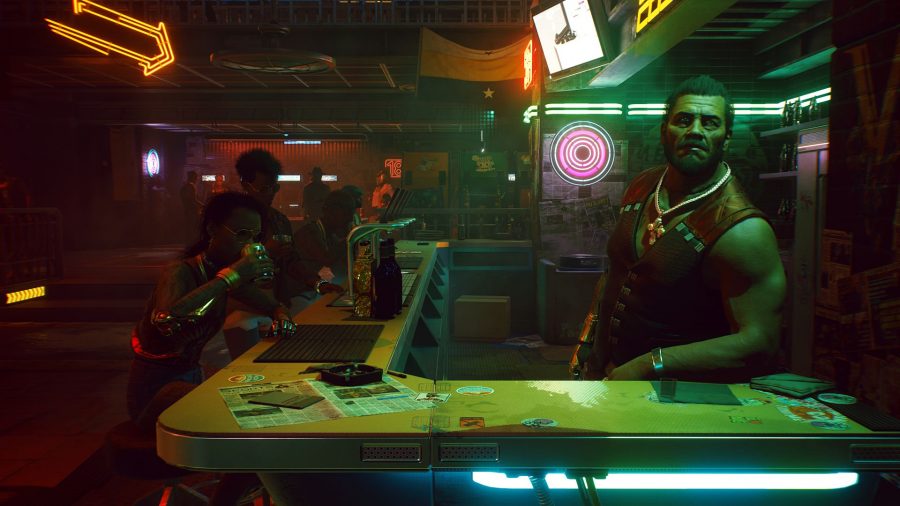 There’s part where you’re going through V’s apartment building and you see this boxing bot in a gym. If you talk to them you can start to earn a reputation in that boxing community there. You could just wander past it and not notice it, but if you do get involved with it – I don’t want to spoil it – the ending is impressive to say the least.

What’s your approach to loot in Cyberpunk and how important do you want it to be?

The fact that Cyberpunk 2077 is an RPG means that loot will always be an important part of it. You need to feel a sense of growth in your character. In terms of pacing, we’re still going to be tweaking loot, but it’s about customisation, so you can also add modifications to your guns and clothing, which in turn impacts your character attributes and opens up new options in the world. We’re still tweaking loot, but we always want loot to encourage experimentation.

I spotted a Witcher 3 easter egg on a retro gaming mag in the Arasaka tower. Obviously, it’s lovely to see that The Witcher games exist in the world of Cyberpunk, but how many Witcher games have there been in the 57 years between now and 2077?

[Laughs] Oh man. I’m trying to calculate development time – it must be in its 50s by this point, right?

How different has it been making a game with customisation at the forefront of everything you do, compared to The Witcher series where the story is predetermined by lore?

We want the player to feel like it’s their story. We’re not playing as Geralt, where your Geralt might be a little bit more gruff than my Geralt, but it’s still Geralt’s story. I think that’s the thing we’re most looking forward to. Players are going to customise their V in ways we might not have thought about, and we hope that people mess around with all of those options so it feels like it’s your story, your V, and your cyberpunk.

Cyberpunk 2077 releases on December 10. You can pre-order the game on the Humble store here.