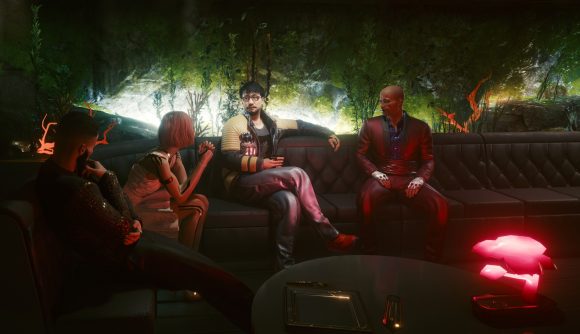 Hideo Kojima, the creator of the Metal Gear Solid series and Death Stranding, has spent a lot of time thinking about the future and our relationship to technology. So it’s perhaps fitting that he appears in CD Projekt’s highly anticipated RPG game Cyberpunk 2077. He’s also kind of a dick.

During one of heists in Cyberpunk 2077, which you can pre-order from the Humble Store, you’re checking out a corpo bar – it’s a swanky place, and it’s got the expected clientele of well-dressed, affluent drinkers sitting in its plush booths. Several patrons are clearly into Night City’s upscale art scene, while another brags about a party he’s throwing on his yacht.

In one corner, you can come across a character named Oshima holding court in a booth. He’s speaking in Japanese, and your cybernetic implants provide an on-the-fly translation. He’s discussing the idea of genre tropes – apparently this is still an issue in Cyberpunk 2077’s world of ‘braindances.’

Oshima says he has a research team in Tokyo that’s currently looking into capturing the full range of human feeling. “I want my production to convey real, raw emotion,” he explains. “Take, for example, the feeling when you combine happiness with melancholy, or being calm with an underlying sense of anxiety.”

Oshima is clearly modeled on Kojima – he’s got the distinctive tousled hairstyle, the bookish round glasses, and even the hip motorcycle-style leather jacket that the Metal Gear creator tends to favour. And it turns out that the name Oshima means ‘large island’ – it’s an alternative pronunciation to ‘Kojima.’

If you hang around a bit, he’ll ask you things like “Do you know my work?” and “Did you bring a pitch for me?” Then he studiously ignores you. How pretentious!

You can check out our Cyberpunk 2077 review if you’d like to know more about the hotly anticipated open-world game ahead of the Cyberpunk 2077 release date, which is set for later this week.

You can pre-order Cyberpunk 2077 on the Humble store by clicking here.