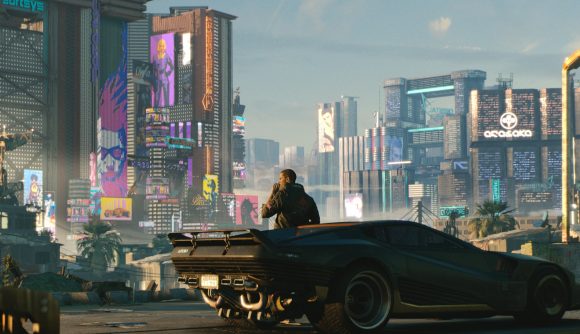 From what we know so far, it looks like Cyberpunk 2077 is going to be quite an experience. All those different character classes and multiple endings on offer will surely let you see lots of different sides to the dystopian world of Night City, and experience many of its stories. However, if you’re keen to dig even deeper, developer CD Projekt Red might have the answer – it’s releasing a book packed with Cyberpunk 2077 lore.

The book, called “The World of Cyberpunk 2077” (via VG24/7), is described as “an insightful, captivatingly designed, full-colour hardcover that transports readers to the futuristic megalopolis of Night City”, with 200 pages containing “everything you need to know about the history, characters, and world” of the game, according to its Amazon pre-order page.

The book is published by Dark Horse Books and looks like it will get both a hardcover and Kindle release. The physical version is currently priced at $39.99 and the Kindle edition at about $29 (or regional equivalents). The release date is given in the description as April 21, 2020, so you’ll be able to get your teeth into the lore of Cyberpunk less than a week after the game’s release on April 16, 2020.

If you’re keen on the idea of some more Cyberpunk 2077 collectible goodies, check out the Collector’s Edition of the game, which includes a cool V figurine, artbook, game compendium, and more – all presented in a Cyberpunk-themed box.

More lore: Check out our guide to Cyberpunk 2077’s story and setting

In the meantime, check out everything we know so far about Cyberpunk 2077, and arm yourself with knowledge ready for your adventures in Night City.