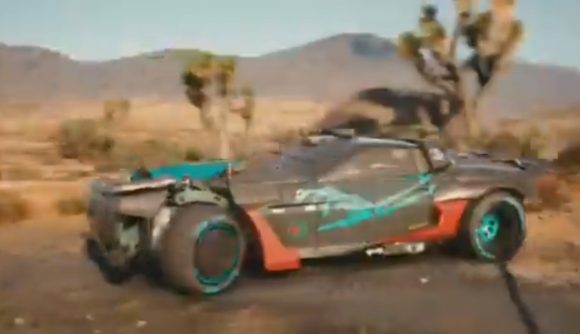 Mad Max: Fury Road came out five years ago May 15, and it’s clear it made an impact on the folks who are currently making Cyberpunk 2077. In honour of the film’s birthday, the Cyberpunk team has created a custom vehicle that you’ll be able to drive when the game launches.

The Reaver is a heavily customised Quadra Type-66, sporting an engine with nearly 1,000 horsepower. That’ll help it scream down the straightaways in Night City, although with the amount of traffic we’ve seen so far in Cyberpunk 2077, your opportunities to really open it up might be pretty limited. Fortunately, the Reaver is also equipped for slower drives – it’s covered with a custom armour kit, as specified by the Wraith gang.

The official Cyberpunk 2077 Twitter account posted a 360 degree look at the Reaver May 15, and it looks like a pretty spot-on marriage of both Fury Road and 2077 aesthetics: the Type-66 has classic American muscle aggression to begin with, and that’s given a wasteland spin from the blackout paint job and irregular armour. Cyberpunk’s influences can clearly be seen with the Wraith gang markings and future-city tech in the rear signal light bar and bright rims.

„Reaver” – custom-built Wraith gang vehicle based on Quadra Type-66 car. With its near 1000 horsepower, you will ride eternal, shiny and chrome.
Happy 5th Anniversary #MadMaxFuryRoad pic.twitter.com/9E0gqJKqV5

There’s a natural connection between the worlds of Mad Max and Cyberpunk that’s personified in the Reaver: the Type-66 that it’s based on is inspired by the 1970 AMC Javelin AMX, which Eurogamer notes is often used by Mad Max fans who want to recreate Max’s iconic Pursuit Special MFP Interceptor from the original films. And the Wraiths themselves are a gang that lives on the outskirts of the city, choosing the hardscrabble life of the wastes over the glitz and grime of the city.

We’ll be looking forward to taking the Reaver for a spin when Cyberpunk 2077 comes out in September.