“Reverse and hold at 38.5”, instructs Captain Anderson. The video feed pauses on the metallic tendrils of an unknowable behemoth as it descends from the skies of Eden Prime. We hold on Captain Anderson’s expression. He maintains his composure, as any good Alliance captain would. “Grab your gear and meet us in the cargo hold”. He looks back to the monitor. His furrowed brow slowly subsides, a subtle flicker of apprehension. Not much was said during this scene, and very little was needed. The facial expressions of Anderson and his Spectre guest communicated the threat with perfect clarity. The Reapers, as they would later become known, were no ordinary threat.

Prior to Mass Effect’s release in 2007, most games featured facial animations that wouldn’t look out of place on an animatronic in Magic Kingdom. Anything that required even a modicum of emotion was often worked into games using pre-rendered cutscenes. Mass Effect was one of the biggest reasons this changed, pioneering a groundbreaking motion capture system that breathed life into its characters – and it was all in-engine. 13 years later, Cyberpunk 2077 shows us just how crucial good-quality facial animations are to maintaining that all-important sense of immersion in videogames.

Take Evelyn Parker – a desperate actress who, for one big score, solicits the aid of Night City’s criminal underclass. We first meet Evelyn at a bar in Kabuki. Laser lights spin around the dance floor like spokes on a bicycle wheel. Nosebleed techno fills the air. She gestures for two drinks from the barkeep, slips off her chair, and confidently walks over to where you are seated. These four seconds of animation time mean everything when trying to convince the player that the character standing in front of them is more than merely a bunch of zeroes and ones. Our blue-haired femme fatale immediately goes on the charm offensive, flashing us a sultry smile. Creases appear along her cheeks – faint traces of marionette lines begin to show. Evelyn is engaging, confident, and in complete control.

After a few breezy moments of small talk, she ushers us into a private lounge and talks shop. Over the course of ten minutes, we watch Evelyn seamlessly transition from one position to the next. Standing idle, she puts her weight on one leg and rests a hand on her hip. She grabs a lighter from a purse, lights a cigarette, puts it back. A gentle flick of the cigarette sees ash spill onto the floor. She paces back and forth while sharing mission intel with you, rolls her head to the side to collect a thought, and sneaks a wry smile when she’s certain she’s convinced you. She even rocks back and forth to rise out of a deep sofa before leaving the room with the rigid stride of someone who’s actually wearing six inch platform heels.

Most games don’t even come close to achieving animations with this level of fluidity, realism, or polish, and this is what sets Cyberpunk 2077 apart from its contemporaries. 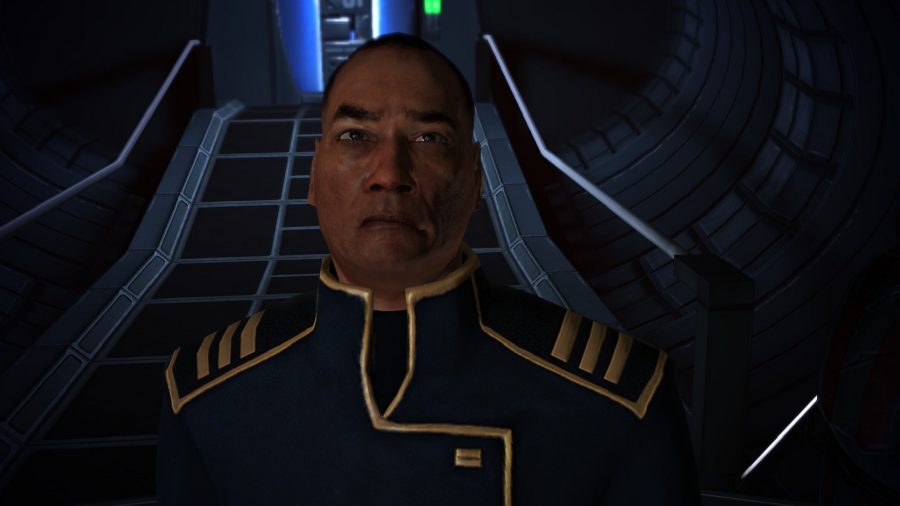 Unrealistic facial expressions and stilted character movements can make or break a game. In the case of Mass Effect: Andromeda these problems were hanging around the game’s neck like a millstone, even months ahead of launch. The backlash went way too far in certain quarters, but trying to coordinate the colonisation of a new galaxy does lose a certain something when your ally’s googly eyes are spinning like merry-go-rounds. Wonky NPCs shoot the breeze through goldfish-puckered lips, their movements often limited to basic hand gestures. Wax sculptures stare back at you, expressionless and uncaring.

Andromeda received a string of patches post-release, but the damage was done

Designing every facial animation by hand is both time-consuming and costly. This is an almost impossible task when building open-world RPG games, and so developers inevitably turn to algorithms to get the job done. In the aftermath of Andromeda’s contentious release, a former BioWare animator, Jonathan Cooper, gave his take on what happened: “Andromeda seems to have lowered the quality of [its] base algorithm, resulting in the ‘My face is tired’ meme featuring nothing but lip-sync”. According to Cooper, the team likely intended to tweak these algorithmic animations manually but simply ran out of development time. Andromeda received a string of patches post-release, but the damage was done. 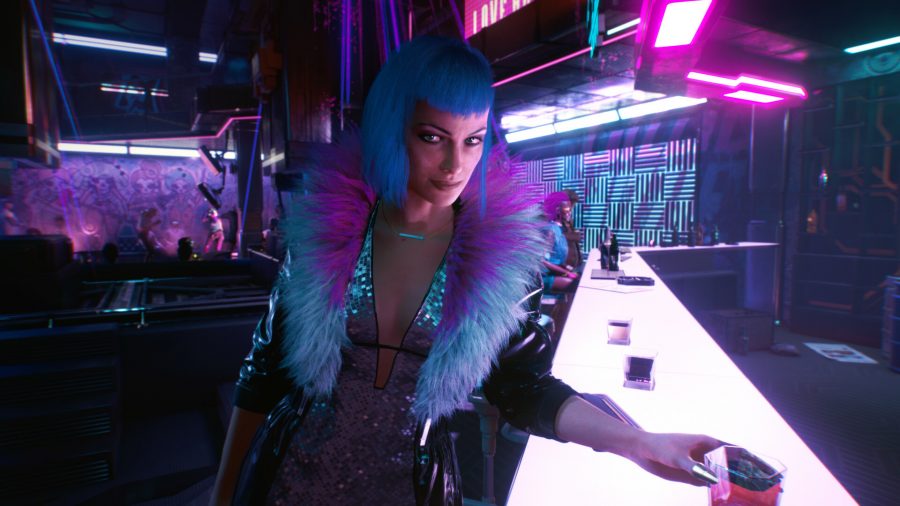 Cyberpunk may have its fair share of technical problems, particularly in its NPC scripting, but lax facial animations aren’t among them. Following the release of The Witcher 3, CD Projekt Red began thinking about how to generate “muscle-driven emotional expressions”. To do this, the studio partnered with the animation wizards at Jali Research Inc. The company’s software toolkit leverages the power of artificial intelligence to generate lifelike expressions, automatically translating what is being communicated vocally onto a 3D character model’s face. Pupil motion, blinking behaviour, and brow movement are all tied to how the AI perceives a voice artist’s performance. The results are impressive.

Over the decades, voice acting in videogaming has come on in leaps and bounds. These passionate performances absolutely deserve good facial animations. Anything less and the player’s suspension of disbelief collapses like a house of cards. This is something Jali Research knows all too well, so much so that the Toronto-based company has gone to great lengths just to master its lip syncing tech. “It is bad lip sync that gets noticed,” co-founder Pif Edwards explains. “Great lip sync draws no attention to itself and instead allows the focus to be on the narrative. It leaves the viewer undistracted while they listen to, and engage with, the characters.” 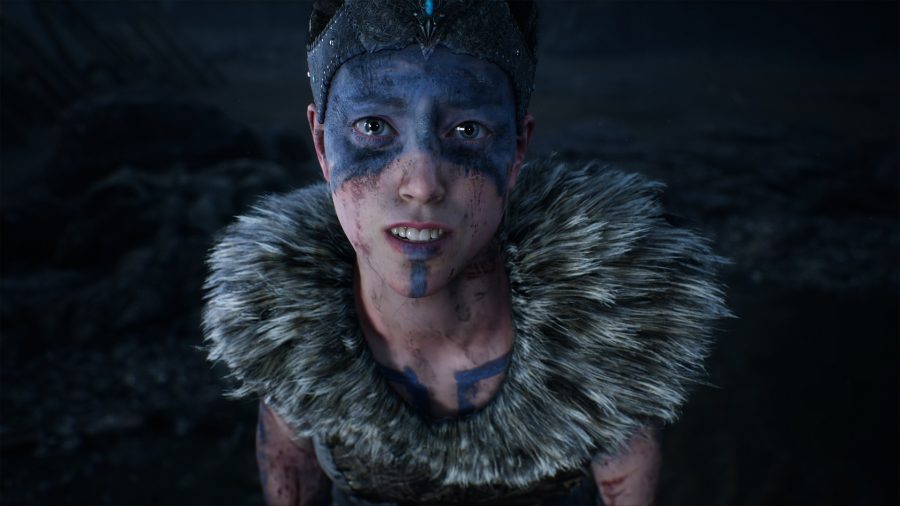 Studios like CD Projekt Red, Crytek, Valve, Quantic Dream, and Ninja Theory have consistently pushed the boundaries of facial animation technology to deliver some of the most unforgettable moments in video game history. Think of Psycho’s explosive rants in Crysis 3, and the way our cockney companion’s stubbly face contorts with his every expletive. How about Alyx Vance’s palpable fear as she tells us the Resistance no longer goes to Ravenholm? Or Michael Mando’s electrifying performance as Vaas in Far Cry 3? The pirate lord’s ‘definition of insanity’ speech is like watching Pandora’s Box slowly creaking open. And then there’s Senua’s unfolding battle with psychosis in Hellblade, her every emotion expressed in horrifying detail.

But it’s worth remembering that these experiences are just one unflattering grimace away from becoming an internet gag reel. Game worlds have become increasingly complex, with day-night cycles, interacting ecosystems of fauna and flora, accurate physics simulations, and so on. Unnatural character animations, then, can seem jarring against the backdrop of these photorealistic vistas, taking on an ‘uncanny valley’ quality that’s completely offputting.

With videogames increasingly blurring the line between action and narrative, a solid animation framework is no longer optional. It spells the difference between whether the audience feels like it’s playing a videogame or experiencing a work of art.