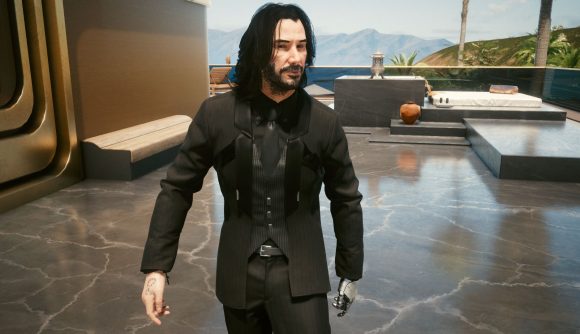 Sure, there are already Cyberpunk 2077 mods that let you play as different characters – like John Wick, for instance – but what about Johnny Silverhand? Shouldn’t he get some other options, too? Well, it looks like one fan thinks so, as they’ve posted a new mod that gives the (cyber)punk rocker a dapper new overhaul – and it’s basically like heading into Night City with John Wick at your side.

The aptly named ‘Suit Up (Put Johnny in a Suit)’ mod from creator Ferret2222 lets you “give your favourite rockerboy a fancy outfit”, as they explain, putting him into one of several different suits and cleaning up his face (“no more scratches and dirt”).  While they’re not actually based on John Wick’s styles as seen in the movie series, they’re really reminiscent of his signature suits – which is also helped by the fact that Keanu Reeves’ hairstyle and beard à la Johnny Silverhand are basically the same as his other character’s in the flicks, making it a perfect fit.

So far, there’s a range of black suit-and-tie variants with different shirt colours, others that see him ditch his jacket for a waistcoat (again, with different coloured shirts), and then there are the party time options. The one with a gleaming gold shirt and waistcoat is particularly memorable, though admittedly far less John Wick-like.

And doesn’t he look happy? Of course he does – he’s got a whole new wardrobe to show off on Night City’s streets now. 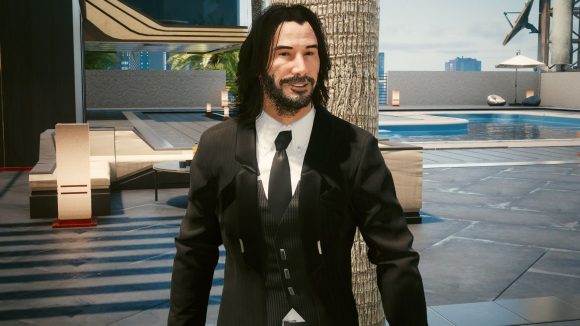 It’s worth noting that you’ll need to have no other mods running that change or replace Johnny Silverhand’s appearance if you’re keen to get him suited up. Otherwise, you can find the mod on Nexus Mods here if you’d like to give it a whirl – as ever, be sure to follow the modder’s instructions and mod with caution!