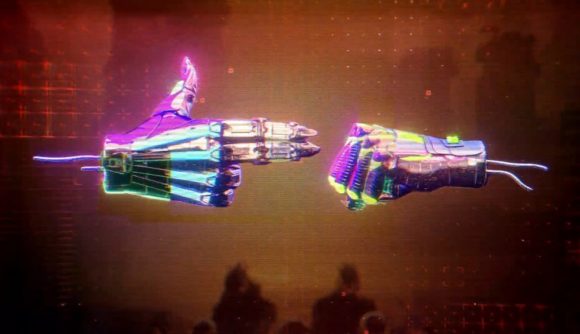 Run The Jewels, the hip-hop duo composed of El-P and Killer Mike, has revealed the music video for its song on the Cyberpunk 2077 official soundtrack.

The single, “No Save Point,” premiered earlier in the week, and now we have an accompanying video of El-P and Killer Mike performing their respective verses, in an effects-heavy recreation of a Cyberpunk 2077 warehouse. Each rapper drops their bars, interspersed with clips of performers decked out in full cyberpunk game fashion, loading weapons and posing on Cyberpunk 2077 vehicles.

The effects and visuals are eye-popping, and really underpin the groove in RTJ’s beat and flow. In an interview preceding the premiere as part of the Adult Swim Festival, a digital event featuring performances and music videos, the two commented on putting together the track, what attracted them to CD Projekt’s upcoming game and their love of science-fiction. “I wanted to bookend it with something that could be in a sequel to Bladerunner,” El-P says, on producing the song. “There’s a beginning piece, and a sort of coda at the end. I wanted to stick it in the cyberpunk world, and feel like you could listen to this jam in a flying car.”

A number of other notable artists, such as Grimes, Refused, and A$AP Rocky, will feature on the soundtrack. All will perform under in-universe pseudonyms; Run The Jewels has taken on the moniker of Yankee and the Brave, after one of the singles on the pair’s latest full-length album RTJ4, a fictitious ’70s TV duo that loosely ties the record together.

Run The Jewels performed the entirety of RTJ4 in October, as part of an effort to encourage voting and raise money for the American Civil Liberties Union. The Cyberpunk 2077 release date was delayed (again) in October, pushing it back to December.