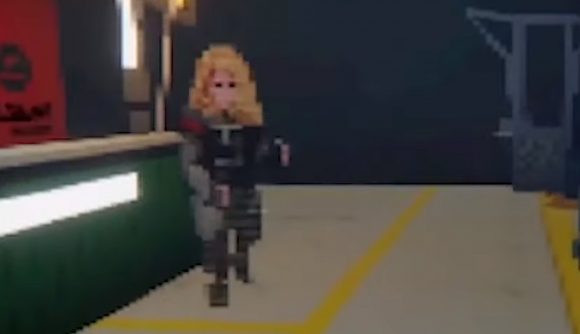 Cyberpunk 2077 is due out next year, and besides its futuristic setting it also features all the expected bells and whistles of modern graphics, right down to the ray tracing support. But what if CD Projekt was making this back in the mid-90s, as a title for the original PlayStation? One person set out answer exactly this question.

Barely Regal has a YouTube channel dedicated to remakes and demakes of popular games in similarly popular creative titles, and the latest is a PS1-style look at the world of Cyberpunk 2077, rebuilt in playable glory through Media Molecule’s Dreams. That’s a PlayStation 4 exclusive, but thankfully you can still enjoy a video walkthrough of the de-rezzed Night City in action.

It’s not quite 240p over SCART, but it is an impressive recreation of the era’s aesthetics, right down to the characters and objects built out of two-dimensional sprites. It’s a tiny chunk of Night City, but Barely Regal says it’s the product of 50 hours of work – and honestly, it’s a pretty impressive use of that time.

You can see it all in the video below (via PC Gamer), along with the creator’s breakdown of how it’s put together.

You can also check out the rest of that channel for a similar demake of Death Stranding or – my favourite – a Lego Red Dead Redemption.

The Cyberpunk 2077 release date is now set for April 16 next year, so we can finally answer the question of what the game will look like in 2020.