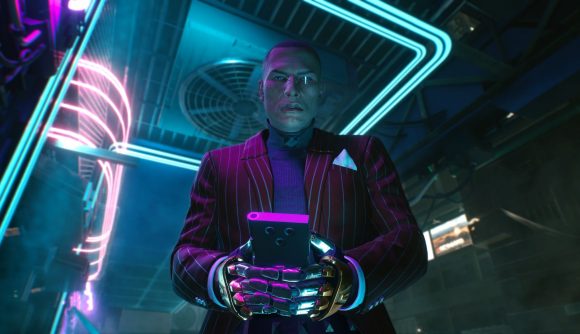 Cyberpunk 2077 pre-loads are live, and as you might've guessed from how that game has been at the top of the Steam top seller charts for months, a lot of people are eager to start playing. The pre-load period for Cyberpunk 2077 appears to have triggered the biggest Steam bandwidth peak ever.

Steam only shows its bandwidth usage for the past 48 hours, so it's difficult to to track exactly when all previous peaks occurred, but it appears that the previous record was set with the launch of PUBG 1.0 back in 2017. During that time, PUBG's daily peak player count increased from 2,699,268 to 2,912,831.

Cyberpunk 2077 is unlikely to reach three million players on Steam at launch, of course – PUBG’s 1.0 increase of just over 200k is likely closer to reality.

If you somehow haven’t ordered yet but want to, you can pick up Cyberpunk 2077 from the Humble Store here.

Steam’s previous biggest single-player launch by player count was Fallout 4 back in 2015. Bethesda’s open-world RPG reached a peak of 472,962 players at launch, and Steam’s overall user count was much lower at the time. However, the PC version of Fallout 4 was only available on Steam. Cyberpunk 2077 is available on Steam, Epic, and CD Projekt’s own GOG storefront, so the Steam player count won’t show the full number of players on PC.

The Cyberpunk 2077 release date is set for December 10.