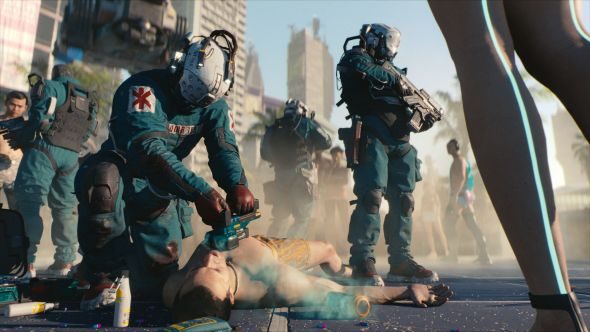 The Cyberpunk 2077 release date might be months away, but pre-orders seem to already be bringing in a pretty penny for CD Projekt Red. In a tweet earlier today, the developer revealed that a third of all pre-orders so far have come from GOG.

This afternoon, the developer announced that “every third copy of the digital version of Cyberpunk 2077 for PC so far” has been pre-ordered through the developer’s own platform, and thanked players for their “breathtaking” support. While GOG is traditionally known for helping to bring older games back to PC players, CD Projekt also uses it as an alternative platform for its own games – last year, Thronebreaker: The Witcher Tales launched on GOG, although disappointing sales mean it eventually came to Steam too.

Cyberpunk seems to have a broader appeal, however, and CDPR also seems to have been pushing the game’s existence on an alternative PC platform a little harder, regularly reminding players that 100% of their purchase goes to the CD Projekt Group if they buy through GOG.

That’s in comparison to an initial 70% through sales from Steam (although given how much money Cyberpunk seems set to make, that share is likely to increase) and 88% from the Epic Games store. At the moment, it’s not clear how much has been made, as we don’t have access to either the overall sales numbers, or the percentage of sales attached to Steam and Epic.

#DidYouKnow — every third copy of the digital version of #Cyberpunk2077 for PC so far has been pre-ordered on @GOGcom! Thank you for your support — it’s breathtaking! pic.twitter.com/Oypidsi6lg

It’s safe to say, however, that Cyberpunk 2077 is likely to net the company some serious revenue. With CDPR’s pedigree behind it, it’s easily one of the most anticipated games set to release in the next 12 months, and there’s still plenty of time left to let that hype build.